Maddow wants to know why Trump Jr. is being brought into 'clarify' testimony when others were prosecuted 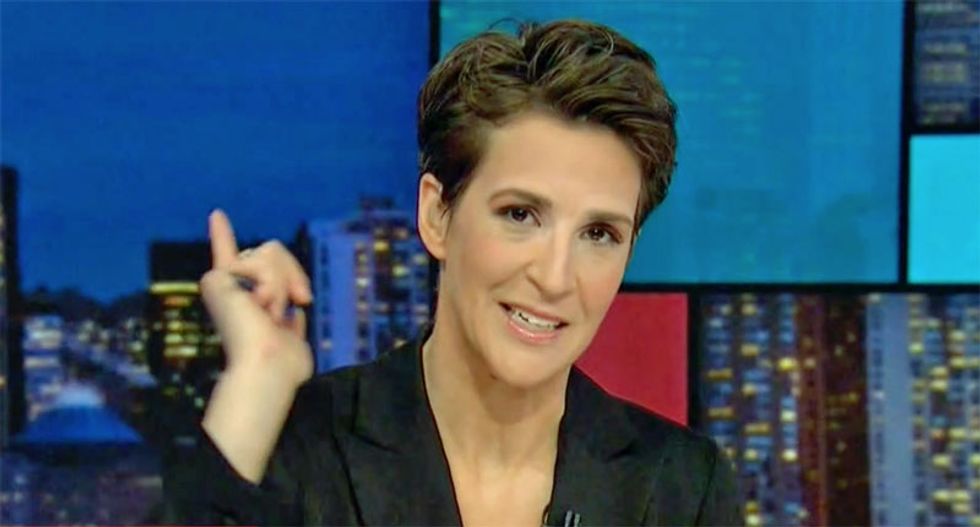 On Wednesday, the Senate Intelligence Committee issued a bipartisan subpoena compelling Donald Trump Jr. to give further testimony about Russia, which has already discussed with Congress, and which he is likely to fight. This comes after special counsel Robert Mueller's report contradicts what he previously told lawmakers under oath.

But as MSNBC's Rachel Maddow noted, the fact that Congress is merely calling him back to testify again is significant, because other witnesses in the president's orbit who were accused of false statements to Congress faced more serious consequences.

"If there was a problem with his testimony on the issue of Trump Tower Moscow, I mean, I think there is an interesting question to be asked about why the committee would be bringing him back in to testify on that matter again," said Maddow.

"Michael Cohen lied about Trump Tower Moscow under oath to the intelligence committees. They didn't bring him back in to clear it up. They gave it to the Justice Department, who charged them with a felony for lying to them. Sam Patten lied to the Senate Intelligence Committee as well. They didn't bring him back in to clarify the matter. They referred him to the Justice Department for prosecution, and ultimately he had to admit in court as part of his plea deal that he committed a felony ... Roger Stone is accused by the Justice Department right now of having lied in his congressional testimony about matters related to Russian interference in the Trump campaign. The committee did not bring Roger Stone back into clarify his testimony. He's going to trial on that as a felony charge."

"The Senate Intelligence Committee is led by Richard Burr, Republican senator from North Carolina," Maddow noted. "He has his own walk-on cameo role in the Mueller report for taking information that he learned about the FBI's investigation from a classified Gang of Eight intelligence briefing on Capitol Hill, he took that information up to the White House and told the Trump White House what he had learned in that classified briefing."

"And I know everybody praises Richard Burr and the Senate Intelligence Committee for their lack of rancor and their bipartisan proceedings," Maddow added. "But if there was a problem with Donald Trump Jr.'s testimony to that committee about Trump Tower Moscow or anything, why is it only the president's son who is getting called back in to readdress the matter when everybody else who got nailed for lying to Congress on that subject and others just got nailed in court for lying to Congress in this scandal? Why are they bringing him back in to talk it over again?"