Morning Joe tries to shame Elizabeth Warren for not groveling to racists on Fox News: 'Reach out to swing voters' 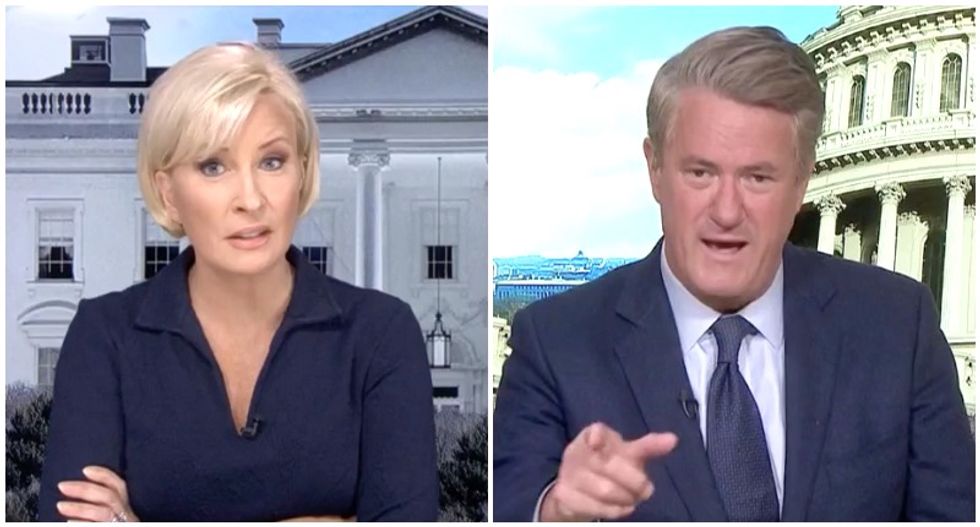 A panel of pundits on MSNBC's Morning Joe tried on Wednesday to push Democratic presidential candidate Elizabeth Warren into participating in a town hall event on Fox News.

In a statement this week, Warren explained why she would not be appearing on Fox News for a town hall event even though Democratic candidates Bernie Sanders and Amy Klobuchar have chosen to do so.

"I love town halls," Warren said in a statement on Tuesday. "I’ve done more than 70 since January, and I’m glad to have a television audience be a part of them. Fox News has invited me to do a town hall, but I’m turning them down—here’s why..."

She continued: "Fox News is a hate-for-profit racket that gives a megaphone to racists and conspiracists—it’s designed to turn us against each other, risking life and death consequences, to provide cover for the corruption that’s rotting our government and hollowing out our middle class."

Host Joe Scarborough argued that Warren should appear on Fox News because several of their on-air personalities like Chris Wallace and Shepard Smith have a history of fairness.

"Don’t you want to reach out to swing voters and go on Fox News?" Scarborough asked.

"Just because there’s a bunch of good journalists who work there doesn’t erase what’s going on there," co-host Mika Brzezinski replied, "which one could argue is exactly as Elizabeth Warren describes it. A direct connection from a corrupt president who is a racist, to megaphones, to people who parrot it like a bunch of dupes. That does happen on Fox. That is clear."

"But I would argue that a presidential candidate should be able to walk into any situation," she added, "walk into any fire and have the confidence and the ability to put it out by spreading the democratic values and his or her beliefs. And I think they should go in to Fox and do all the town halls they can do."

"It seems to me, Fox News is a great place," Scarborough later opined, "for Democrats to go, engage, pick up a few swing voters. At the very least, who knows? You get support for people who may have never supported you before."