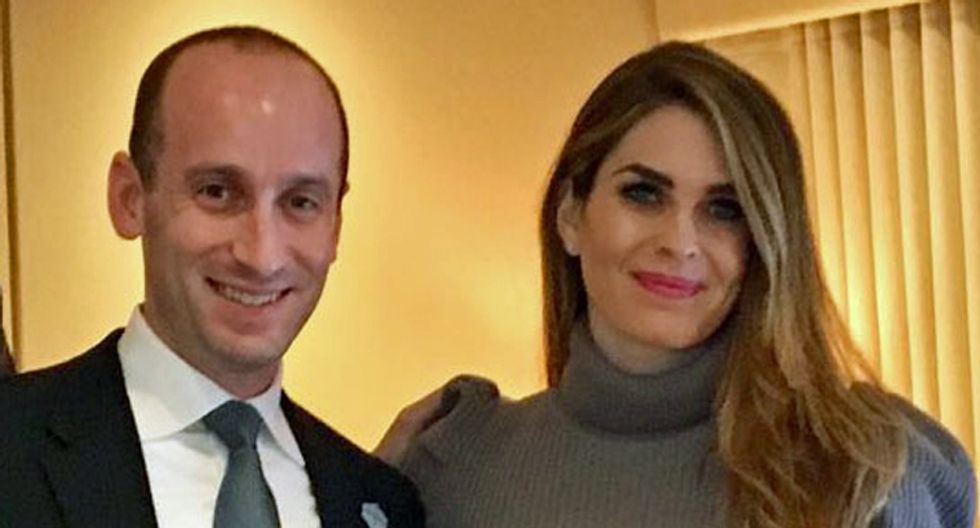 White House photo of Stephen Moore and Hope Hicks on Air Force One.

Longtime Donald Trump confidante has been subpoenaed by Congress but is considering whether to violate the legal order.

On Saturday, The New York Times published a story wondering if Hicks would comply with the subpoena from the House Judiciary Committee.

"The aide, the former communications director Hope Hicks, who left the White House with an enduring mystique that inspired countless news media profiles, is now a private citizen living in California," The Times reported. "While serving in the White House, Ms. Hicks never appeared on camera, unless it was at Mr. Trump’s side, and never gave an on-camera interview."

Both Hicks and her lawyer declined to comment for the article, but The Times included studio photo of Hicks by photographer Tom Brenner that was widely described as a "glamour shot."

There was quickly backlash about both the artwork, the headline, and the editorial decision to run the article.

Most existential questions have no clear answer. What is my purpose in life? What happens after I die? Is there a h… https://t.co/l0bFvkaIys
— Max Kennerly (@Max Kennerly) 1558833803.0

I feel like in most public-facing corporate jobs "defying valid subpoena" would be a firing offense. https://t.co/DzhiQsbG6o
— Brian Beutler (@Brian Beutler) 1558833237.0