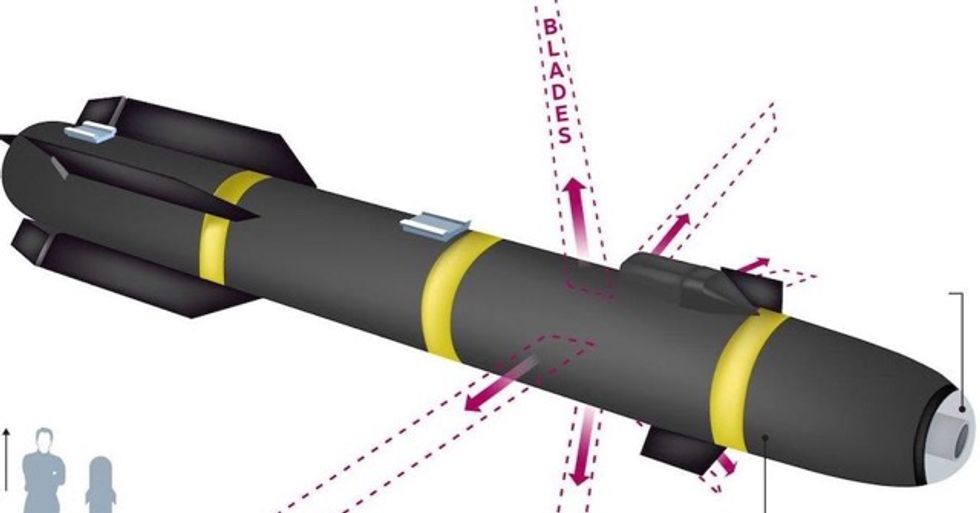 The R9X missile has no warhead, but it has blades. (Image: Nick Waters, Twitter)

"This knife missile seems like something ACME Corporation would design to kill Road Runner."

The U.S. military and the CIA reportedly have a new tool in their arsenal: a bomb that doesn't explode, but deploys sword-like blades to kill or maim its human targets.

The R9X Hellfire Missile, which The Wall Street Journal reported Thursday has been used at least twice—once by the Pentagon and once by the CIA—is a new weapon that is intended to reduce civilian casualties. The missile does not have an explosive warhead, but rather uses its weight and "a halo of six long blades" that deploy before impact to shred through whatever is in its path.

"To the targeted person, it is as if a speeding anvil fell from the sky," said the newspaper, citing an official familiar with the missile.

Nick Waters, an award-winning journalist and researcher, noted that while previous suspected drone strikes by U.S. forces overseas had produced mysterious results, perhaps the R9X—"a Hellfire missile with fucking swords attached to it," he said—provided a possible explanation.

The Journal was able to identify two strikes that used the R9X.

In January 2019, Jamal al-Badawi, accused of being behind the bombing of the USS Cole in 2000 in a Yemeni port, killing 17 American sailors, was killed by an R9X fired by the Pentagon. The Pentagon has acknowledged the strike, which occurred in Yemen, though not the specific munition involved.

In February 2017, Ahmad Hasan Abu Khayr al-Masri, an Egyptian national who served as al Qaeda’s No. 2, was killed in Syria's Idlib Province by an R9X fired by a U.S. aircraft operated by the CIA. The CIA doesn't acknowledge airstrikes it carries out.

The new missile was apparently developed to fulfill an Obama-era directive to reduce civilian casualties from the American drone war.

A U.S. official told the Journal that the bomb could, in theory, solve what the official described as "right seat, left seat" problem: killing a driver or passenger while letting the other person live.

But, as the Journal pointed out, "Two militants reportedly were killed in the February 2017 strike."

Security experts and observers were bemused at what Task and Purpose deputy editor Jared Keller called "an anvil covered in swords."

"This knife missile seems like something ACME Corporation would design to kill Road Runner," said Defense News naval warfare reporter David Larter. "The payload would either be knives or it can deploy a goofy, over-sized white-gloved hand that bops you in the head with a hammer."

This knife missile seems like something ACME Corporation would design to kill Road Runner. The payload would either… https://t.co/pvJbCdC95a
— David B. Larter (@David B. Larter) 1557425602.0

This work is licensed under a Creative Commons Attribution-Share Alike 3.0 License