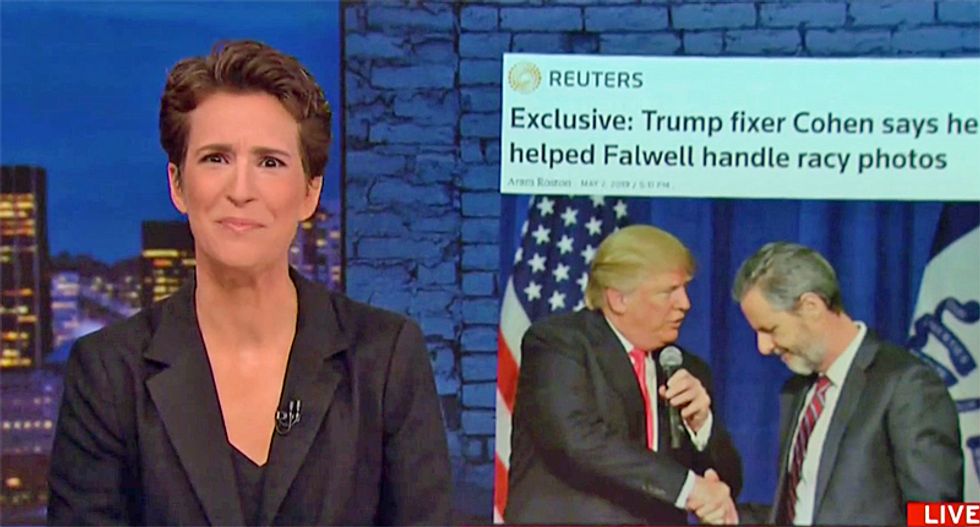 MSNBC anchor Rachel Maddow warned viewers at the start of her Tuesday show that they may feel dirty enough to require a shower after her lead story on Jerry Falwell, Jr.

Falwell, the president of Liberty University, was the focus of an exclusive report by Reuters detailing an effort to get Donald Trump fixer Michael Cohen to cover up the release of salacious photos.

Falwell went on to announce an endorsement of Trump that Maddow described as "inexplicable."

Cohen reported to federal prison on Monday to begin a three-year term that included a conviction for his role in Trump's hush-money payments to Stormy Daniels and Karen McDougal.

"Just six days before the Iowa caucuses in 2016, then-presidential candidate Donald Trump got a critical endorsement from a most unexpected place," Maddow noted. "He got a very high-profile endorsement from this man, Jerry Falwell, Jr. "

"Jerry Falwell, Jr. is known mostly for being Jerry Falwell Jr. But also for inheriting control of his dad’s cash cow televangelist college, which is called Liberty University," she explained.

"When Jerry Falwell, Jr. decided to endorse Trump in January 2016, he not only endorsed him at that key moment ahead of the Iowa Caucuses, he also heaped praise on him, calling Trump, 'a wonderful father and a man who I believe can lead our country to greatness again.' He said, 'In my opinion, Donald Trump lives a life of loving and helping others as Jesus taught in the great commandment.' I mean, right, that is so obviously about Donald Trump," Maddow joked.

It was just odd that Falwell endorsed Trump, but it was also odd who he did not endorse.

"I mean, Ted Cruz had literally launched his 2016 presidential campaign with his family at Liberty University. He launched his campaign there around telling the whole story of his father’s life as an evangelical preacher just like Jerry Falwell. But nonetheless, Jerry Falwell, Jr. snubbed Ted Cruz and all the other candidates and threw his support to Trump instead, describing him as the most Jesus-like of all of the candidates," Maddow noted.

Maddow then detailed the Reuters story on Falwell's photos.

Cohen said he had seen one of the photos in question, which he described as "terrible." 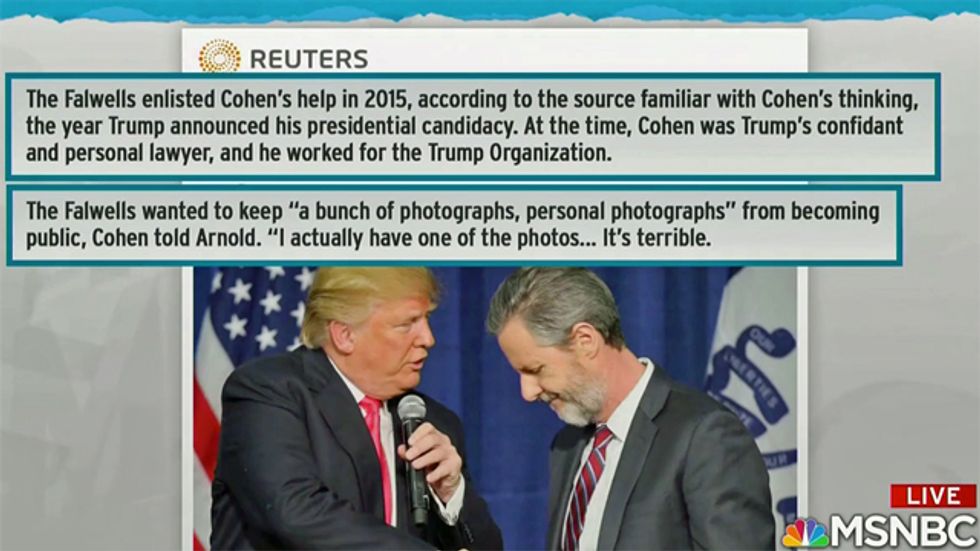 "Then the following January, just ahead of the Iowa caucuses, Cohen helped persuade Falwell to issue his endorsement of Trump’s presidential candidacy at a critical moment just before the Iowa Caucuses," she also noted.

"Might have been helpful to have that one racy, terrible, photograph in reserve when it came to being persuasive about when to issue that endorsement," Maddow suggested.

"Asking for a friend, is an endorsement intended to influence the outcome of a federal election a thing of value?" Maddow wondered. "And are you allowed to arrange for such a thing of value to be contributed to a campaign by quashing naked picture blackmail efforts for televangelists with added insurance of keeping naked pictures for yourself as a reminder?"

"Is this normal?" she asked.