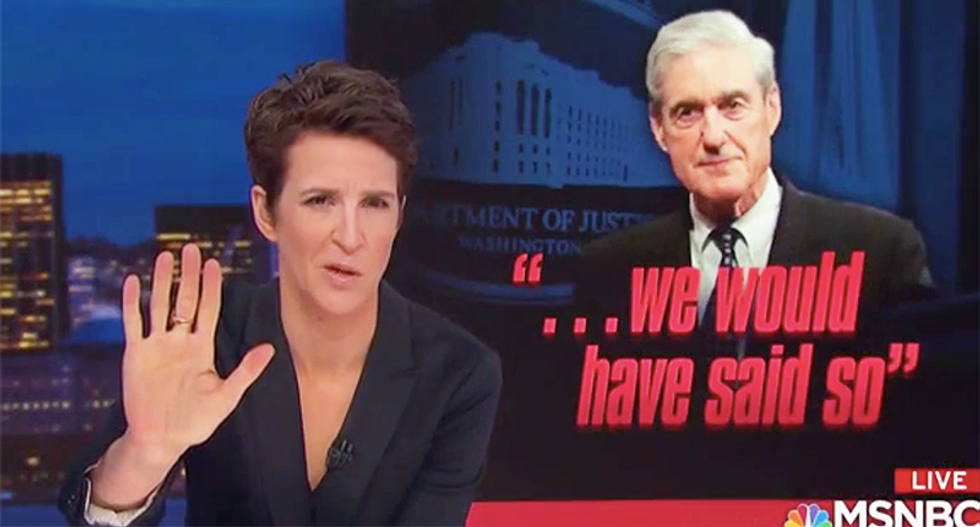 Special Counsel Robert Mueller spent less than ten minutes at a Justice Department podium giving his farewell press conference before dropping the mic and resigning. But true to his profession, Mueller's short speech was laced with legalese and paraphrases of his two-volume report on the Russia investigation.

During her Wednesday show, MSNBC's Rachel Maddow explained that nothing Mueller said was new.

"Mueller has now, for the first time, in more than two years, he has been allowed to speak on his own terms," Maddow said. "And he has made clear, in no uncertain terms, that the next move is not going to come from him. It's going to have to come from Congress."

In fact, most of it comes directly from his report. But with the overwhelming majority of the country (and Congress) unwilling to read it, Mueller was forced to give a brief digest.

But if that Mueller digest is still too long for the sound byte culture, Maddow boiled it down into 60 seconds.

"The work speaks for itself. Here it is," Maddow began. "We in the special counsel’s office can’t charge him. Here’s the evidence we found, though. We’d tell you if he clearly didn’t commit obstruction, and boy-howdy are we not saying that. We tried to clear him. Couldn’t. And by the way, obstruction is a really serious crime, and to the extent that there was criminal obstruction here, and we lay that out over more than 100 pages, that was obstruction of a really, really important investigation into something very, very bad for our whole country that every American should really care about. And did I mention that’s it from me."

She speculated that Congress would still likely call Mueller to testify, but he made it clear that he will never go beyond the report itself. Mueller made it clear during the press conference that he labored over every word in his report to make it crystal clear.

"Imagine if Mueller had just been allowed, at the outset, to release the introductions that he and his team wrote, summarizing the two volumes of their report," Maddow said. "Imagine if at the outset Mueller had just said publicly what he finally was allowed to say publicly today about his investigation and about his report. Imagine that had been from the outset how we learned about what Mueller found and what Mueller did and what the country and specifically the Congress is expected to do with the evidence that Mueller turned up that he couldn’t use to bring charges but somebody could."

Meanwhile, Attorney General Bill Barr has spent the past nine weeks "making up porky-pies," she said.