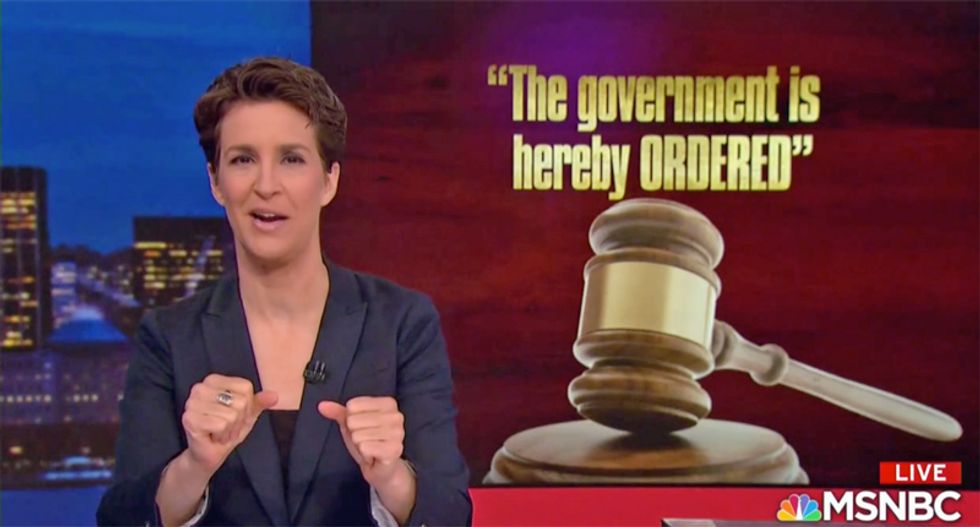 MSNBC anchor Rachel Maddow struggled to wrap her mind around why President Donald Trump is not being impeached after it was revealed his personal attorney attempted to influence Mike Flynn's cooperation with special counsel Robert Mueller.

“Defendant informed the government of multiple instances, both before and after his guilty plea, where either he or his attorneys received communication from persons connected to the Administration or Congress that could have affected both his willingness to cooperate and the completeness of that cooperation,” the court filing said. “The defendant even provided a voicemail recording of one such communication."

"They were reaching out to Mike Flynn to talk to him about what exactly he planned to tell prosecutors and whether he planned to cooperate with them and how much and on what topics. We know that one of those instances of outreach from persons connected to the Trump Administration was referenced as the voice mail here, which we think is probably the same reference from Mueller’s report about a lawyer for the president, 'the president’s personal counsel' leaving Mike Flynn a voice mail," she explained.

"This is amazing," she noted.

"And in the Mueller report, this is sort of a particularly mafia-esque episode in Mueller’s report. I mean this is literally the part where Flynn is about to cooperate, right? He pulls out of the joint defense agreement, it’s pretty clear he’s about to plead guilty. He’s about to start cooperating. And he in the dead of night gets the warning from the president’s goon squad letting Mike Flynn know if he’s thinking about cooperating you know what, Mike, here’s what you might want to keep in mind," she reported.

"And I mean just a little personal aside here, how is the president not being impeached for obstruction of justice right now?" she asked. "I mean, that episode alone"

"I realize there’s a lot of equities involved in terms of whether or not the president is going to be impeached for stuff like this," Maddow noted. "But this is the president’s personal counsel calling up Flynn and being like, 'You know, it might be a national security issue if you said anything about the president. You know how much the president likes you, wouldn’t want me to tell him you turned hostile on him, would you? I’m going to go ahead and tell him. I’m going to tell him you’ve become hostile to him if you cooperate, you sure you want to cooperate?'"

"This is like the stuff that gets cut out of a B-movie because it’s a little too ham-handed in terms of explaining to the audience how this particular crime family does its business," she added.