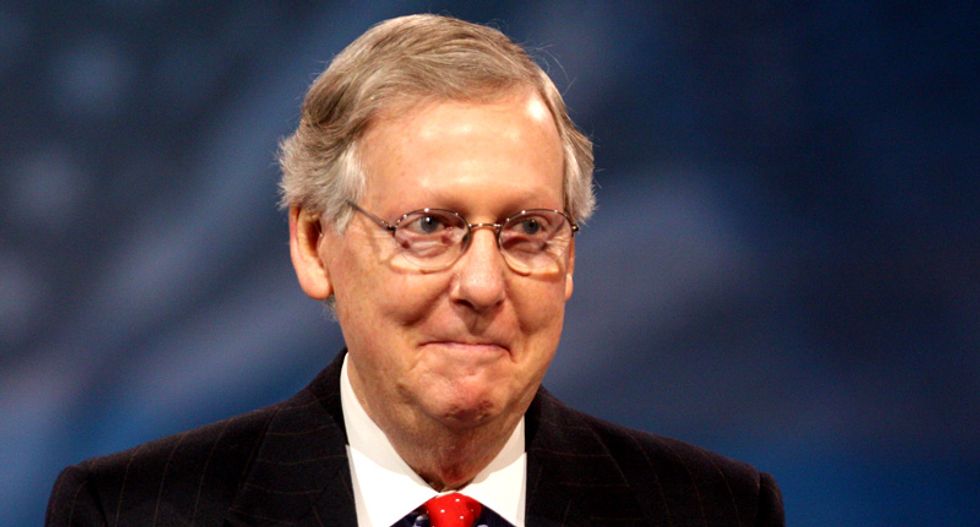 There are many reasons that Republicans and conservative activists love Donald Trump, but among the top must be that he makes it much easier for them to enact their wildly unpopular agenda. Trump's all-consuming ability to grab the headlines and dominate news coverage creates an opportunity for the far right to push for its regressive agenda, safe in the knowledge that such efforts (understandably) will get little attention from a media addicted to the Trump Show.

Nowhere is this more obvious than when it comes to the conservative battle to make sex discrimination legal. This fight is a particularly difficult one for the right, politically speaking. While Americans still cling to sexist gender roles at home, overwhelming majorities believe that sex discrimination in public spaces should be illegal. So conservative activists are turning to their favorite weapons — bad faith and distraction — to advance an agenda of gender inequality.

On Tuesday, the House Judiciary Committee held a hearing to analyze the possibility of amending the U.S. Constitution so that it explicitly bars discrimination based on sex. The Equal Rights Amendment (ERA) simply states that that equal rights cannot be denied "on account of sex." It was first introduced in 1923, but ratification of it became a serious issue in the 1970s, when feminist activists began convincing states to ratify it. They got famously and tantalizingly close, falling just three states short of ratification before hitting a 1982 deadline created by Congress.

While many have long assumed the ERA is forever dead, like Jon Snow, it's rising again. Two more states have ratified the amendment and now activists are arguing that the deadline set by Congress in the 70s is invalid, since the Constitution doesn't give Congress that power. Tuesday's hearing was focused on this question: If a 38th state ratifies the ERA, what can and should happen next?

"A few years ago, a great woman, a great person, Justice Ruth Bader Ginsburg, was asked in an interview what amendment she would most like to see added to the United States Constitution," said Rep. Stephen Cohen, D-Tenn., during his opening remarks at Tuesday's hearing. "She answered it would be the Equal Rights Amendment."

But while conservative activists' efforts have largely flown under the radar, it's safe to say they have pulled out all the stops in their fight to keep the ERA out of the Constitution, and in fact to roll back existing protections against sex discrimination that progressives have already secured.

One flank of the attack is focused on the states. A number of state legislatures are looking at the possibility of becoming the 38th (and deciding) state to ratify the ERA, and in every case legislators are being swarmed by right-wing activists who don't hesitate to use deceit and hysteria to stop this from happening.

In April in Missouri, anti-feminist activists leaned heavily on Republican legislators, using the scare word "abortion" in order to stoke opposition to equal rights. And sure enough, the Republican leader of the state Senate, Dave Schatz, came out against the ERA, saying that the "majority of this [amendment] is about abortion" and claiming that Jesus would oppose it. (Jesus' known positions on issues of human equality would suggest otherwise.)

Virginia came within a hair of ratifying the ERA, but because the 2017 state elections were so close that the Republicans literally held their legislative majority by a coin toss, the ratification was killed. Once again, anti-abortion hysterics played a major role in the fight, with conservatives falsely accusing Democrats of wanting to legalize infanticide, all as part of a sexist campaign to demonize any effort to secure equality for women.

Even during Tuesday's federal congressional hearing, Republicans were at it again. Rep. Mike Johnson, R-La., warned that "the people’s right to protect the unborn would be eliminated if the ERA was to pass," and argued that women's equality should not be enshrined in the Constitution lest it damage the ability of conservatives to meddle in women's medical care access.

But, as Kamala Lopez of Equal Means Equal and legal expert Wendy Murphy told Salon, the legislative fights are only part of the picture. They expressed concern about a series of cases that the Supreme Court has agreed to hear that are billed as LGBTQ cases in the media, but, legally speaking, are also about the issue of sex discrimination.

The three cases, which will be bundled into one before the Supreme Court, all involve LGBTQ workers being fired for their identity. In two cases, the workers were fired for being gay and in the third, a woman was fired for being trans. The court is expected to examine whether or not these firings constitute sex discrimination that violates both state laws and the 1964 Civil Rights Act.

The pro-LGBTQ side is arguing that this case is covered by a precedent set in 1988, when the Supreme Court decided it was a form of illegal sex discrimination to penalize employees for failing to perform their gender in a way that pleases their bosses. In that case, a woman was able to successfully argue that her employer had discriminated against her by denying her a promotion unless she learned to "walk more femininely, talk more femininely, dress more femininely, wear makeup, have her hair styled and wear jewelry." Forcing employees to conform to gender stereotypes, the court decided, was in itself a form of sex discrimination.

LGBTQ advocates argue that if employers expect employees to be straight, or to adhere to a gender identity assigned at birth, that is a form of gender stereotyping that should, under this precedent, be illegal. Many feminist legal experts worry that if the court rules against the LGBTQ employees in these cases, it will not only set back LGBTQ rights but will also make it easier to discriminate against women on a much larger scale.

"These cases are designed to strike at the very heart of the law's understanding of what it means to discriminate against someone because of their sex or their gender," Imani Gandy, a legal expert at Rewire, explained in a recent "Boom! Lawyered" podcast. She goes on to note that a hostile decision in this case could lead to "firing a gay man for not being sufficiently 'macho'" or to employers paying women less "because of a belief that men should be the heads of households."

As Murphy explained in a follow-up email to Salon, she believes part of the reason the Supreme Court is taking the case now is part of a conservative divide-and-conquer strategy. Unfortunately, some feminist organizations have been reluctant to back a robust definition of "sex discrimination" that includes discrimination on the basis of sexual orientation or gender identity. So these cases create an opportunity to chip away at progressive solidarity between these causes and weaken the movement against sex discrimination overall.

Whether in the courts or the legislatures, the right is pursuing an elaborate strategy to attack women's equality and preserve sex discrimination by coming at the issue sideways. Instead of flatly admitting to opposing women's legal equality, conservatives are hiding behind more provocative or "controversial" issues such as abortion rights or trans rights, which are less politically popular than the ERA, as a way of derailing efforts to fight sex discrimination.

Conservatives also know they have to move fast. Support for both abortion rights and LGBTQ equality are rising, making it harder to exploit the controversies around both to undermine women's equality. That's why the right is seizing this moment to step up efforts to stop the ERA and undermine existing protections against sex discrimination. Anti-equality activists understand they might not have another chance.