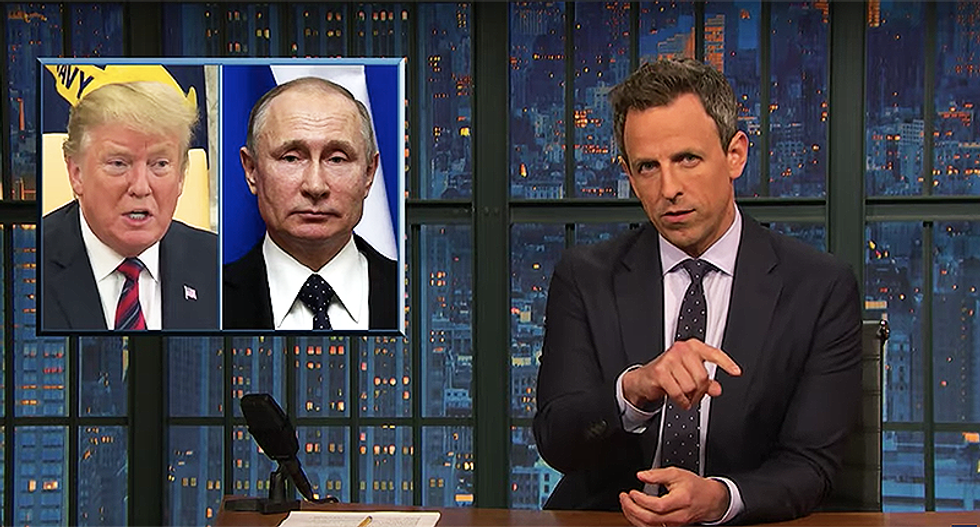 On Friday, President Donald Trump noted that he had a phone call with Russian President Vladimir Putin. Reporters questioned him on what all was said and if they discussed the findings of Robert Mueller's report that declared Russia definitively meddled in the U.S. election.

"We discussed it, uh. He sort of smiled when he said, uh, something to the effect that it started off as a mountain and it ended up being a mouse," Trump told the media. "But he knew that because he knew there was no collusion."

"I'm sorry, can we go back to this?" Meyers asked running the tape back to Trump's description of the call.

"How did you know he was smiling?" the "Late Night" host wondered. "Did you try to call him and accidentally hit the FaceTime button, grandpa? Putin doesn't seem like the kind of guy who would FaceTime unless he's beaming into the U.N. on a giant screen demanding $1 billion or he'll kill James Bond."

Meyers did note, however, that he believes Trump's claim that Putin was smiling. Most time the Russian leader is frowning and serious, but "when he sees Trump, he lights up like he just heard there was a sale on poison."

Watch the "Closer Look" segment below: