Steve King denies racist meeting: 'Nobody is doing any neo-Nazi plots with homosexuals and Jews at the table' 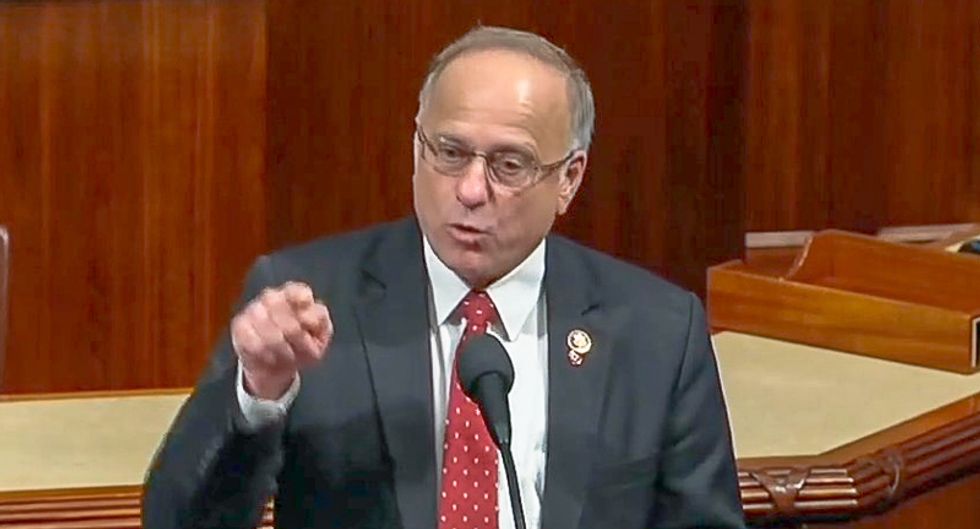 Rep. Steve King (R-IA) over the weekend insisted to a group of constituents that a meeting he attended in Austria couldn't have been with racists because "homosexuals and Jews" were also at the table.

The Carrol Times Herald reported that King took pre-screened questions from a audience of about 40 people at the Carroll Chamber of Commerce on Saturday.

One man argued that "this country is going to hell in a hand basket" because King had been stripped of committee assignments following a New York Times report where the Iowa congressman appeared to question what was wrong with the term "white supremacy."

“It was a political lynch mob, and you have to let their blood cool before you can reason with a lynch mob,” King said of fellow members of Congress.

The lawmaker also defended his meeting with a group of far-right Austrians who are said to have neo-Nazi ties.

“I was introduced to five people I didn’t know,” King explained. “We sat down at the table, and during that pause of who’s going to talk first, the gentleman on my right said, ‘Congressman, I think you should know that you’re seated at the table with two homosexuals and a Jew.’ The man across the table said right away, ‘Well, who’s the Jew?’ And that told the rest of us he knew who the other homosexual was, I guess.”

According to The Carrol Times Herald, "[s]ome people in the audience Saturday chuckled" at King's story.

King added: "But I tell you this because nobody is doing any neo-Nazi, anti-Semitic plots with homosexuals and Jews at the table... It’s the most improbable configuration of people possible.”