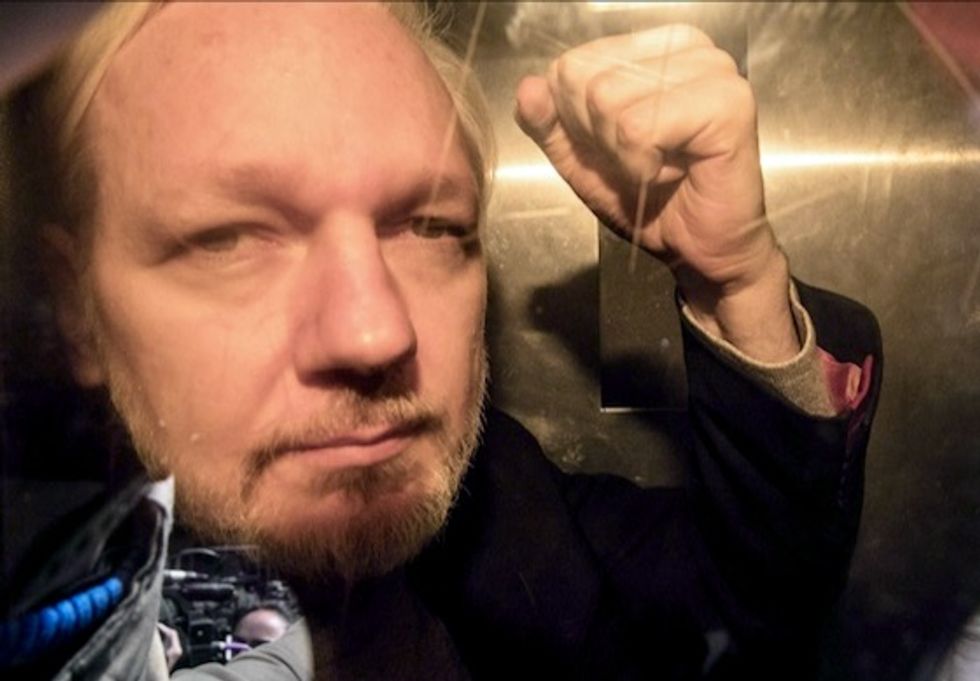 Assange raised a clenched fist as he arrived in a prison van at Southwark Crown Court. AFP / Daniel LEAL-OLIVAS

Swedish prosecutors said Monday they were reopening a 2010 rape investigation against WikiLeaks founder Julian Assange, hoping to bring him to justice before the statute of limitations expires in August 2020.

The 47-year-old has claimed the Swedish allegations were a pretext to transfer him to the United States, where he fears prosecution over the release by WikiLeaks of millions of classified documents.

"I have today decided to reopen the investigation... There is still probable cause to suspect that Mr Assange committed rape," the deputy director of public prosecutions, Eva-Marie Persson, told reporters.

The Australian whistleblower, who holed himself up in the Ecuadoran embassy in London for seven years to avoid a British extradition order to Sweden, was arrested on April 11 after Ecuador gave him up.

A London court sentenced him on May 1 to 50 weeks in jail for breaching the British order.

"Now that he has left Ecuador's embassy, the conditions in the case have changed and I am of the opinion that the conditions are in place once again to pursue the case," the prosecutor said.

Persson said she hoped Assange could be questioned again in the case. She said he would soon ask a Swedish court to remand him in custody in absentia, and a European arrest warrant would be issued.

Assange's spectacular arrest revived his Swedish accuser's hopes of seeing him brought to justice, and her lawyer asked prosecutors to reopen the rape investigation.

The alleged victim, who says she met Assange at a WikiLeaks conference in Stockholm, filed a complaint in August 2010.

She accused him of having sex with her -- as she slept -- without using a condom despite repeatedly having denied him unprotected sex.

Assange has always denied the allegations. His website's editor, Kristinn Hrafnsson, said Monday the reopening of the investigation would give him "a chance to clear his name".

Hrafnsson also said in a statement that there had been "political pressure" on Sweden to reopen the case.

With the Australian in the Ecuadoran embassy, the Swedish case dragged on for years over procedural difficulties and prosecutors were never granted permission to question him directly.

In testimony released in December 2016 -- after an Ecuadoran prosecutor grilled him over questions supplied by Swedish prosecutors -- Assange insisted the sex was consensual.

In May 2017, Sweden's director of public prosecutions Marianne Ny decided to close the preliminary investigation into the rape allegations.

She argued that since Assange could not be reached after taking up residence in the embassy in London in 2012, it was not possible to proceed with the probe -- but left open the possibility that it could be reopened if Assange were to become available again.

The statute of limitations on the rape allegation expires on August 17, 2020. If the legal process drags on past that date, then the case would have to be closed, the prosecutor said.

In 2015, Swedish prosecutors dropped a separate sexual assault probe into Assange, filed by another woman, after the five-year statute of limitations expired.

Assange's biggest concern however remains an extradition request from the United States, where he is wanted for hacking.

That extradition request was only revealed following his dramatic arrest in London, when police dragged him out shouting from the embassy.

A US indictment charges him with "conspiracy" for working with former US Army intelligence analyst Chelsea Manning to crack a password stored on Department of Defense computers in March 2010.

Manning passed hundreds of thousands of classified documents to WikiLeaks, exposing US military wrongdoing in the Iraq war and diplomatic secrets about scores of countries.

Assange could face up to five years in jail if found guilty, although his team is fighting his extradition and the process could take years.

The charge has raised serious concerns among free speech advocates.

The Swedish prosecutor said that if Britain were faced with a conflicting European arrest warrant and US extradition request, it would be the British authorities' prerogative to determine which has priority.