There's only one solution to America's political crisis 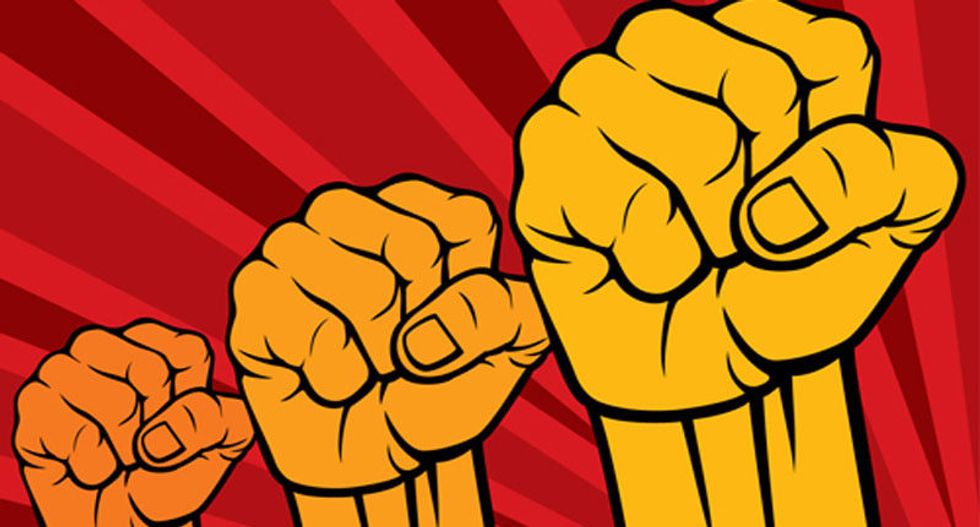 Hardly a day has gone by over the last two years when one hasn’t been able to learn of yet another soul-numbing outrage on the part of President Donald Trump and his administration. The stories have been relentlessly disturbing:

Most recently, the White House is engaged in chilling and open defiance of Congress’s clear constitutional power to oversee and investigate the executive branch. In a recent hearing held by federal Judge Amit Mehta on the administration’s lawsuit claiming that Congress possesses no legitimate power to obtain Trump’s financial records, Trump’s lawyer, William Consovoy, argued that Congress lacks authority to investigate and publicize possible wrongdoing by the president. An incredulous Mehta asked Consovoy if this meant that Congress’s investigations into Watergate and Whitewater (here we night add the Iran/Contra affair and more) were unconstitutional. Consovoy hemmed, saying it would depend upon the basis for those investigations. It was “straightforward,” responded Mehta: “Congress was inquiring into possible violations of the law by the president.”

“In that case,” Consovoy said, “then yes, perhaps Congress did overstep its authority.”

The president, in short, is above the law, according to his lawyers.

Piecing all these and countless other horrific stories about Trump and his presidency together, anyone with any basic knowledge of fascism, past and present, can easily and correctly identify him as an aspiring fascist leader. It is rare, however, for liberal corporate media operatives to go all the way with the F-word—fascism—when it comes to describing Trump.

Their silence here is ironic. Worried talking heads at MSNBC—an outpost of the Democratic Party’s reigning corporate establishment—and across the liberal punditocracy warn frequently and loudly about what they consider the Democratic Party’s “socialism problem.” They do this even though just a small handful of Democrats (Bernie Sanders, Alexandria Ocasio-Cortez and Rashida Tlaib) identify as “democratic socialists.” They fret over the socialist menace despite the fact that all these “radical” Democrats mean by “socialism” is capitalism with some long overdue Western- and northern European-style social reforms.

Meanwhile, the party in power is headed by a white nationalist authoritarian buoyed by a significantly fascist base. The norm-smashing president is moving from fascist-style politics to fascist-style policy with audacious speed and zeal. His politics and policies draw heavily on the classic fascist notion that the nation is menaced by a big, radical left—a notion that liberal media is helping spread with its warning against Democratic “socialism.”

Two other mainstream media silences deserve mention in the age of Trump. The first is the absence of any serious discussion of how fundamentally defective the American social and political system was—and is—to allow someone like Trump to rise to power and stay there. The dominant media beyond Fox and right-wing talk radio appear to think that everything was fine and democratic when Barack Obama sat in the White House. In the mainstream telling, Trump and his minions enter the stage of history almost out of nowhere, as if dropped from outer space—or by Vladimir Putin and Russian military intelligence. Trump, his agents and his backers are portrayed as deviant anomalies, strange products of weird quirks in the election cycle, including supposedly potent “Russian interference in our democratic elections.”

This is nonsense. Trump is as American as apple pie. He is the latest poison icing on the cake of an American fascist nightmare that has been cooking in the homeland’s hidden ovens of neoliberal race-class oppression for decades. He is the ugly outcome of a long process of social, cultural and political decay that has been underway since at least the mid-1970s. He reflects our failed, oxymoronic “capitalist democracy”—what Noam Chomsky has cleverly called “really existing capitalist democracy: RECD, pronounced as ‘wrecked.’ ”

It was the neoliberal nothingness of corporate Democrats, with their abject subservience to Wall Street and corporate America and their cold-blooded globalist betrayal of the working-class majority, that demobilized the nation’s majority-progressive voting base and opened the door for the reactionary populist Trump to shock the world (including himself, though not Steve Bannon) in 2016. But, deeper still, the Democrats’ dismal centrism reflects the wildly disproportionate power of concentrated wealth in a plutocratic winner-take-all social and political order in which the democratic promise of elections is trumped by the unelected dictatorships of money and empire (no Russian assistance required). This trumping continues regardless of which party or configuration of parties holds sway in federal, state and local government.

You won’t hear about the deeper system that hatched Trumpenstein on cable news, where, as leftist historian and journalist Terry Thomas told me in January:

The Trump fiasco allows the inauthentic opposition [Democrats] to sit around and smugly refer to themselves as “the adults in the room,” as if that’s now all that’s required. There’s no need for Bernie or radical change, we just need someone who is not mentally ill, an “adult in the room.” The Democrats act like we’ve got this covered because we’re sane and the Orange Dumpster’s not, our point has been proven, so now just give us power again, and we’ll put everything back together, nothing more needed. But the truth is glaringly obvious: how flawed and fundamentally dysfunctional must the system be to allow something like this to happen?

“Please don’t insult our intelligence, Thomas adds: “The adults were in the room—by their estimation, Obama was the epitome of adulthood—and it produced this.”

The harsh systemic reality—the ways in which the corporate state discredits liberal institutions and democracy to provide ground for the development of far-right and even fascist politics—is a nonstory in the dominant media and politics culture.

A second and related media silence is on the need for massive popular protest—real resistance—beyond the election cycle to bring down the Trump regime and the system that gave rise to it. The media may come up short by failing to properly portray Trump as a fascist, but they do accurately present a vicious authoritarian, a racist, a sexist, a gangster, a malignant narcissist and a modern-day “royal brute” (to use the Declaration of Independence’s language referring to King George in 1776).

What should the populace do about the presence of a soulless despot atop its government who thinks he’s above the law? Tyrants who would rule like kings are supposed to face popular upheavals, aren’t they? You won’t hear word one about the need for disruptive mass action of the kind liberal talking heads and pundits endorse when it emerges inside such officially designated enemy and “adversary” states as Venezuela, Russia and Iran. The implicit and sometimes explicit counsel here in the supposedly civilized homeland is to play by the rules: Be good citizens and let the Constitution and (to use Thomas’s phrase) the adults in the room (the Democrats) do their good works. The guidance is to chill and the let the business and professional class “experts” handle things. Keep calm and let the system work. Wait for the congressional investigations to reach fruition. Wait for Nancy Pelosi to explain again why she is or is not pursuing impeachment. Wait for the next quadrennial presidential electoral extravaganza to play itself out. Wait for the Democrats to nominate the right-wing, arch-corporatist-imperialist Joe Biden, adding Kamala Harris to his ticket for some deceptive, fake-progressive race and gender identity ballast. Spend our time between now and then learning about all the interesting and wonderfully “diverse” Democratic presidential candidates (up to 24 in number by now) as they fly around the country this year.

It’s bad advice. Depressing Wall Street corporate Democrats and identity politicos like Biden and Harris are part of how we got in this pathetic, creeping-fascist mess in the first place. They are unlikely to break through the Electoral College (which grants disproportionate power to white red state voters) and defeat Trump. Their party is determined to once again (as in 2016) rig the game against Sanders, the Democratic candidate who is running closest to majority opinion on key issues—and the one most likely to rally demobilized and disadvantaged segments of the electorate to defeat Trump.

Even if Biden—or whatever corporate centrist the Democrats will likely affix atop their ticket—somehow defeats Trump (a recession would help), the rightward drift of American society will continue unabated, given the not-so-leftmost major party’s determination to ignore and silence popular voices to its wide and deep port-side. Popular resentment abhors a leftist vacuum.

If we, the people, are serious about stopping Trump, we’ll take to the streets en masse to engage in substantial and unrelenting civil disobedience. If we are serious about democracy beyond just the removal of a single noxious ogre, we won’t go home just because a narrow-spectrum, big money, major media candidate-centered election is being held on its regular, absurdly time-staggered, once-every-1,460-days schedule. We won’t go home even if Trump loses and agrees to leave without incident. If we’re serious about popular sovereignty, we’ll stick around to “dismantle the corporate state” (Chris Hedges) that birthed both Trump and the inauthentic opposition party (the neoliberal era Democrats), along with so much else that has long outlived its expiration date (i.e., the fossil fuel industry and the Pentagon system).

Don’t hold your breath waiting for liberal talking heads or politicos to tell the people the truth about how they need to take to the streets to fight Trump. As Thomas explains:

There are now legal scholars making the case on national television that the president must be judged by an entirely different standard than the rest of us lowly citizens. That’s how this works: Trump types keep pushing the envelope, and by doing so push the terrain of discourse ever closer to fascism. And if he has sufficiently captured the federal court system, Trump could win. I would say the proper response is for House Democrats to call for mass demonstrations to give evidence that people oppose this authoritarian shit. But they will never do it, in part because they are afraid of the people in the streets. It’s the centuries-old dilemma faced by the likes of John Adams in the American Revolution. Once you put the people in the streets, you run the risk of losing control of them.”