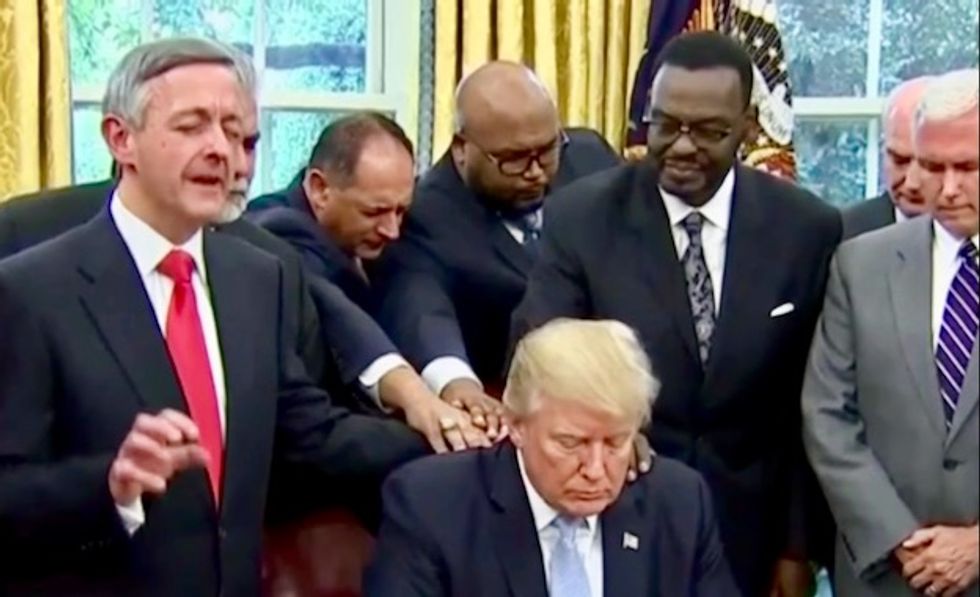 Anti-abortion activists are newly emboldened. Alabama's new draconian law placing severe restrictions on abortion — not even allowing them in the cases of rape or incest — and levying stunning prison sentences on those who violate the ban is only the latest salvo in their campaign.

But for some conservatives who seek to limit abortion, it's not all going according to plan. Many fear that the new push is too fast, too aggressive, and too extreme — and that it risks sparking a powerful backlash.

Jonathan Last, writing for the conservative outlet The Bulwark, articulated this position clearly in a newsletter Thursday morning.

"This law is going to drive pro-choice fundraising for a decade," he wrote. "It will be overturned at the appellate level. It will almost certainly be denied certification by the Supreme Court. It will then disappear into the pro-choice direct mail machine where it will raise tens of millions of dollars for the groups who want unlimited, unfettered abortion on demand."

He also argued that it will make the battle for Republicans to keep the Senate — which could easily hinge on the difference of one or two seats — much harder.

And as Washington Post columnist Jennifer Rubin pointed out Thursday, there are already clear signs that the law is causing problems for vulnerable senators:

When asked about the Alabama ban, Sen. Martha McSally (R-Ariz.) (who lost her race for Senate but was then appointed to the seat originally held by the late senator John McCain) ducked. “That’s a state issue. I’m focused on my work here," she insisted.

In a press call Thursday morning NARAL Pro-Choice America executives, NARAL’s president Ilyse Hogue rebuked McSally. “That’s at best naive and at worst a deceptive response by McSally.” Hogue pointed out that this is a coordinated “attack” by the extreme right and, moreover, that all federal officials have a role to play in women’s health. (McSally, of course, also votes on judges.)

Even House Minority Leader Kevin McCarthy (R-CA) came out against the law, noting that it did not have the exceptions for "rape or incest" that he supports/

Erick Erickson, another high-profile conservative, said he's worried that the abortion bans will cost Trump his re-election — though he offered an explanation that differed from Last's claims. He argued that Democrats are already motivated to turn out, so boosting their enthusiasm won't tip the scale much. But he doubts the laws' chances for success in the courts, and that could depress conservatives:

The Supreme Court may allow some of these laws to proceed and give states more leeway, but I really do think Roberts would join the Court’s liberals to preserve the status quo and I would not be surprised to see Kavanaugh join them.

Decisions that would preserve Roe, particularly with a Trump pick joining the majority, would depress some segments of the conservative movement that totally invested in the line that holding their noses to vote for Trump would see Roe overturned.

As I noted yesterday, far-right televangelist Pat Robertson made a similar argument — that the Alabama law is so extreme that it will fail to overturn Roe v. Wade.

None of this means, of course, that people who oppose abortion bans and support the pro-choice movement should be complacent. These conservatives may be wrong, and there are, obviously, pro-life advocates who disagree with them. And part of the theory about why the new push will fail is that advocates for the right to abortion will be mobilized, but that won't happen if they fail to take the threat seriously.

But recognizing the fractures in the conservative movement on strategy is a useful antidote to the ugly mirror-image of complacency — despondency. Some people fear that, with Trump having appointed Justices Neil Gorsuch and Brett Kavanaugh, there's no hope left for the right to choose in the United States. That is far from a sure bet — as even many conservatives themselves realize.