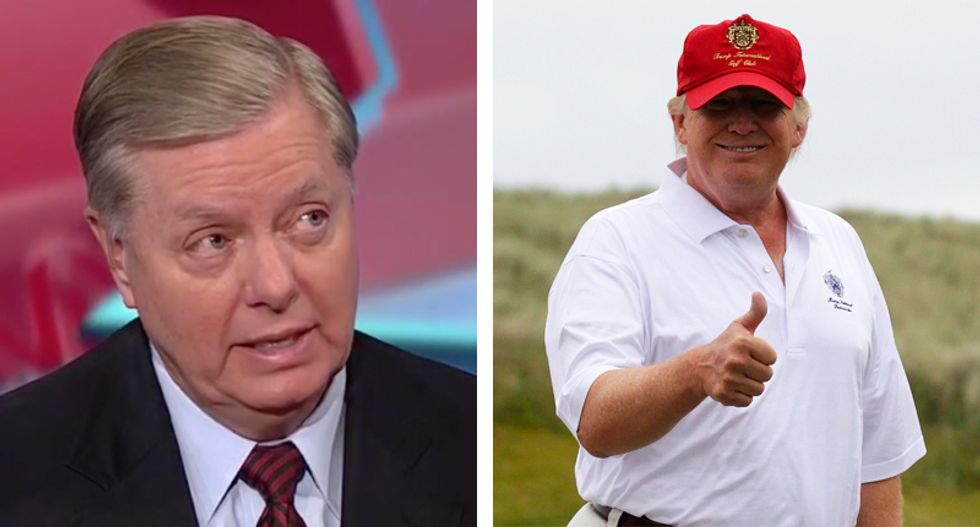 President Donald Trump introduced an immigration proposal in the Rose Garden Thursday, but took a moment out to instruct Sen. Lindsey Graham to get it done today.

"And I know a number of our Republican friends and others -- Lindsey, I see you sitting right there and Steve, you’re working on a plan, an immediate plan, a smaller plan but a very immediate plan to stop it as of this afternoon," Trump told the audience, pausing his speech.

"So, as fast as you can get something done," Trump told Graham, who sat nodding like a bobble-head. "This is the big, beautiful, bold plan, but we need something very quickly, and if you can get it done, that would be fantastic. Okay? Thank you."

Rep. Steve Scalise (R-LA) patted Graham's arm as the cameras focused on them.

Graham worked with Sen. Dick Durbin for nearly two decades to craft an immigration plan that both parties could agree to. The votes to pass it existed, but Senate Majority Leader Mitch McConnell (R-KY) refused to bring it up for a vote after Trump said he didn't like it.

"If they stand to lose critical seats in Congress, in the Senate or in the House because this issue has become more difficult and more challenging, I think the White House will begrudgingly acknowledge that they have to do something," Durbin said in 2018.

Trump said that Americans wouldn't stand for not passing his bill and he would ultimately pass it after the 2020 election when he takes back the House of Representatives.