Trump cheated when golfing with Tiger Woods -- today he was 'star humping him': CNN commentator 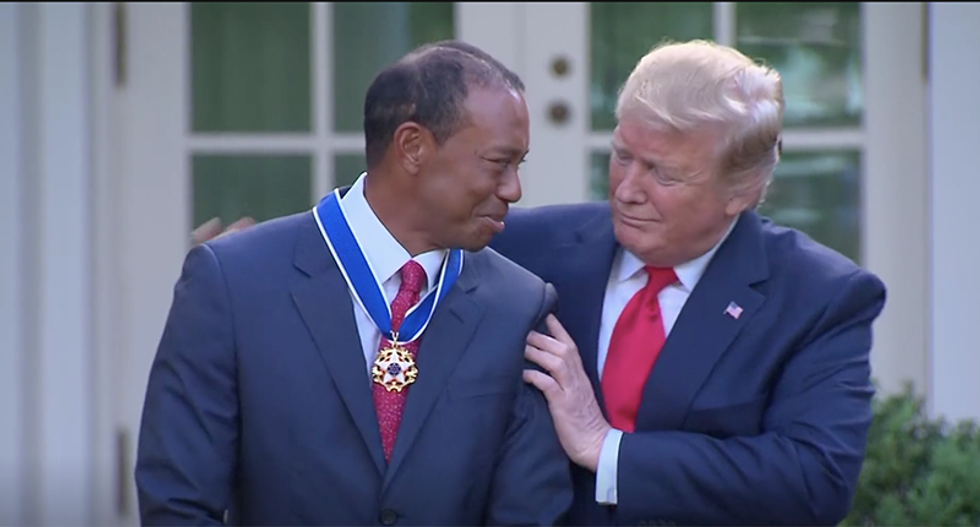 President Donald Trump is the antithesis of Tiger Woods, according to a CNN panel speaking to Don Lemon Monday. While many other sports stars of color have refused to meet with Trump, Woods is in a business relationship with the president.

Rick Reilly, author of Commander in Cheat: How Golf Explains Trump recalled that when Woods and Trump played golf together, Trump cheated. In fact, Trump is known to frequently cheat at golf.

"The thing that shocked me, really, was that Trump cheated Tiger Woods in a match in 2017," Reilly said. "Hit two balls in the water, [Tiger] didn’t see. Hit it on the green. Tiger said, 'what are you putting for,' Trump said, 'four' when he was actually putting for seven. I wonder if he whispered that in his ear as they were slipping the medal over his head."

He also noted that he found it unusual Woods would accept the award when he has such a different philosophy about golf than Trump.

"Trump believes golf -- and he said this three times publicly -- should only be for those who can afford country club memberships," Reilly said. "He thinks it demeans the game -- public golf. Tiger Woods is all about the Tiger Woods Foundation, which teaches golf to underprivileged and at-risk kids along with education. How does he reckon that with his kids that look up to him? He just took a medal from a guy who doesn’t think they deserve golf?"

Lemon noted that it would be challenging to turn down a Presidential Medal of Freedom.

Pundits throughout the day have noted that the award presents yet another conflict of interest for Trump, whose golf course in Dubai was created by Woods. The famous golfer also has an exclusive villa named after him at Trump's Miami club.

CNN political commentator David Swerdlick explained that there are so many conflicts of interest with Trump and other world leaders that this one is almost small in comparison. As a result, the story hasn't garnered much discussion.