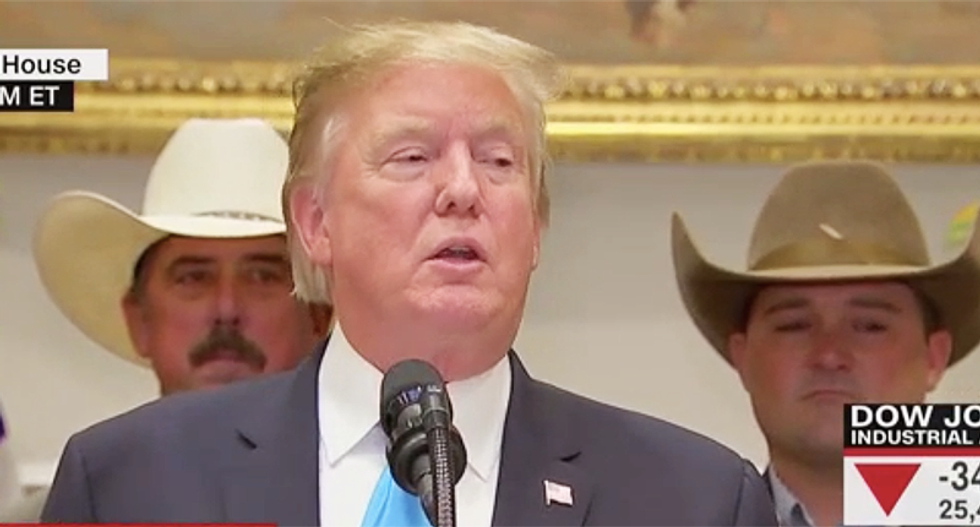 President Donald Trump was supposed to speak about farmers suffering from his ongoing trade war and how he intends to bail them out. But midway through his remarks, he pivoted to attack House Speaker Nancy Pelosi instead, saying trade is too complicated for her to understand.

"So, we’re fixing broken trade deals to open up markets for American exports," Trump said. "Including with the brand-new U.S./Mexico/Canada agreement that Democrats in Congress are many supporting and they have told us they’re supporting it us regardless of leadership. I don’t think Nancy Pelosi understands, the deal is too complicated, it is not a complicated deal. It is not a complicated deal. It is a deal that is many, many times better than NAFTA. I consider NAFTA one of the worst deals ever made in the history of our country. Think the World Trade Organization, Larry Kudlow, may be worse because of what it has done with respect to trade and international trade and trade with China and how much money our country is losing to China every year. So World Trade Organization has been really bad, but the NAFTA has been one of the worst deals ever."

Farmers and ranchers have been suffering under Trump's trade policies that have created instability in international trade. Many farmers who sell soybeans to other countries have been hit hard.

Trump also declared his own "mission accomplished" by claiming that farmers are better off now than they were in 2016.

"For years farm income has declined. And we’re talking about many years," Trump said. "This year, however, and I was a little surprised to see this because I know that there has been really a trade-attack on our great farmers, net farm income because our economy is doing so well, is forecast to be nearly $8 billion higher than in 2016. Did you know that? You’re doing better than you were doing in 2016. Nobody told me that. But that is because our economy has been so strong and our economy is about as good as it has ever been."

Watch the remarks below: