Trump is only fighting with Pelosi because he's trying to deflect from his financial scandals: MSNBC analyst 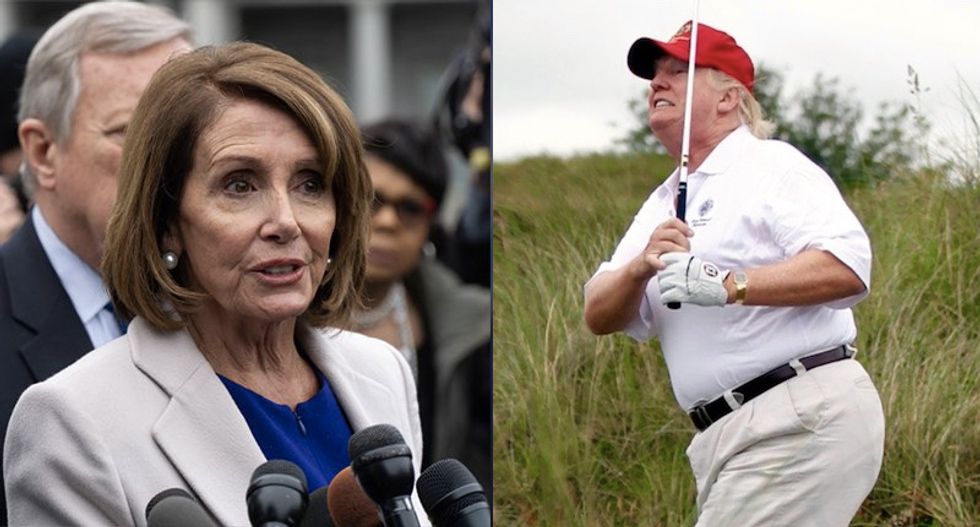 Speaker Nancy Pelosi speaking to the press and Donald Trump playing golf, as he has about 30 hours a week during his presidency. (Photos: Photos By Michael Candelori/Shutterstock and Screenshot)

MSNBC analyst and Politico Congressional reporter Andrew Desiderio concluded that the only reason President Donald Trump is fighting with House Speaker Nancy Pelosi is as a distraction.

During a panel discussion with MSNBC host Kasie Hunt, Desiderio said that Trump is suffering from several scandals involving his finances and judges just granted Congress access to his taxes. While Trump is still fighting tooth and nail in court over some of these rulings, it's hardly effective in quashing the rumor-mill on cable news.

"Both sides love these rhetorical feuds," Desiderio claimed. "Nancy Pelosi loves them because it gets her out of the impeachment conversation, a chance to bludgeon the president ahead of 2020. For the president, it gives him a reason to paint the Democrats they’re only out to get me for political reasons. That came to a head, in particular, this week because the president was facing the heat over the two court rulings that upheld the subpoenas the Democrats set forth for his financial records. The president talked about that as his 'red line' in these investigations that have targeted him the last two years."

He explained that Trump is "feeling the heat" from these investigations.

"And the best way to put the spotlight off of that was the blow up the infrastructure meeting the way he did," he said.