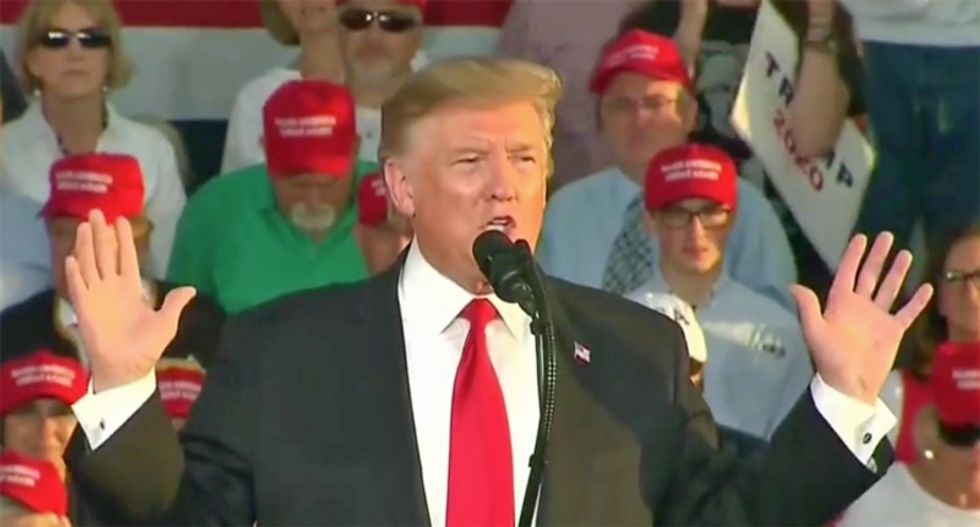 For years, President Donald Trump has denounced Hillary Clinton and riled up his followers at rallies with chants to "lock her up!"

The idea that Trump would want to imprison his political opponents has seemed more like an empty political stunt than potential reality.

But on Monday night at a rally in Montoursville, Pennsylvania, the president hinted that he would jail staffers at the Department of Justice for investigating him -- and that Attorney General William Barr would do his bidding.

"Trump accuses the FBI and Democrats of treason. He then has to pause as his fans chant, 'lock them up!' Tweeted reporter Aaron Rupar from the rally. 'We have a great new attorney general who will give it a very fair look,' Trump says."

Writing in Rolling Stone, columnist Ryan Bort observed that this was not the only sign of authoritarianism evident at the rally. Trump also suggested he'd exceed his lawful terms in office, in some kind of vengeance against the officials who investigated his campaign's ties to Russia and obstruction of justice.

"We’re going to have a second [term], and then we’re going to have another one,” Trump said Monday night. “We’ll drive them crazy. And maybe if we really like it a lot, and if things keep going like they are going, we’ll go and we’ll do what we have to do, and a three [terms] and a four, and a five.”

"Beautiful evening for a MAKE AMERICA GREAT AGAIN rally tonight in Pennsylvania. Thank you, I love you! #MAGA" the President Tweeted at the conclusion of the event.

Bort said the rally provided “the latest, terrifying look into the president’s tendency toward authoritarianism, which is becoming less of a tendency and more of a full-throated embrace as he continues to bend the government to his will.”