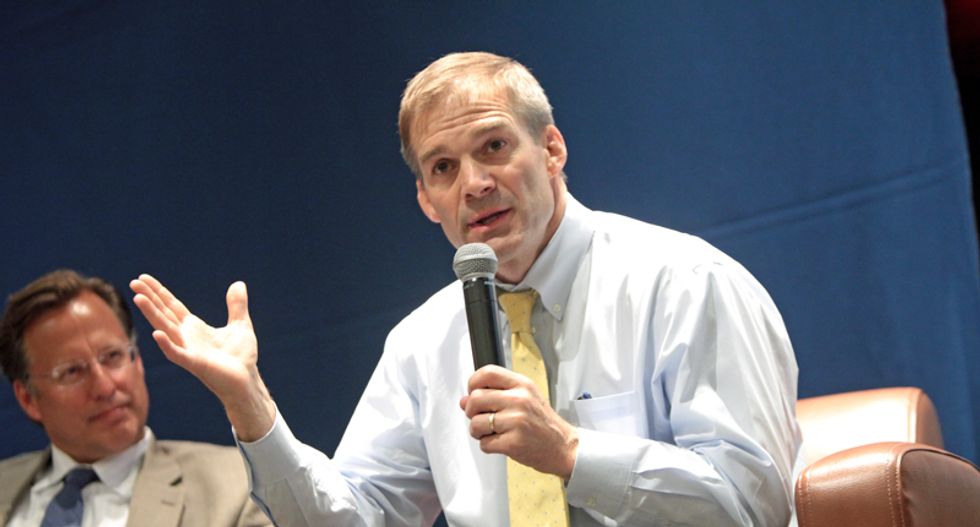 Rep. Jim Jordan (R-OH) speaking at the 2015 Young Americans for Liberty National Convention at the Catholic University of America as Rep. Dave Brat (R-VA) looks on. Photo by Gage Skidmore.

Rep. Jim Jordan of Ohio has been an influential figure on the far right. The Ohio Republican is popular with the Tea Party, he was a founding member of the House Freedom Caucus, and his influence on the far right is so strong that, according to a report by Melanie Zanona and Andrew Desiderio for Politico, President Donald Trump’s legal team is “taking cues from Jordan, adopting many of his arguments and even asking a federal judge to obtain documents from Jordan in order to build their legal case against Democrats’ myriad investigations targeting the president.”

The 55-year-old congressman, in an interview with Politico, emphasized that he isn’t actually coordinating with the White House. Yet as Zanona and Desiderio point out, he is having a strong impact on Trump’s legal strategy.

Jordan has encouraged Donald Trump, Jr. to defy a subpoena from the Senate Intelligence Committee, and Zanona and Desiderio note that Trump’s legal team — including William Consovoy — has been “picking up on the same lines of attack” encouraged by Jordan and Rep. Mark Meadows, who “have teamed up to highlight what they say is a coordinated Democratic effort to politically damage the president ahead of his reelection bid.”

In 2019, Zanona and Desiderio observe, Trump’s legal team is promoting “a restrictive view of Congress’ oversight authority” and doing so with Jordan’s encouragement. Jordan, they write, is a textbook example of Republican politicians “broadly resisting Democrats’ attempts to investigate alleged crimes committed by the president”—with Consovoy “parroting many of Jordan’s talking points.”

Zanona and Desiderio conclude their article by noting that during a recent Fox News interview, Jordan had some advice for Donald Trump, Jr. regarding the Senate Intelligence Committee subpoena: ignore it and don’t show up.