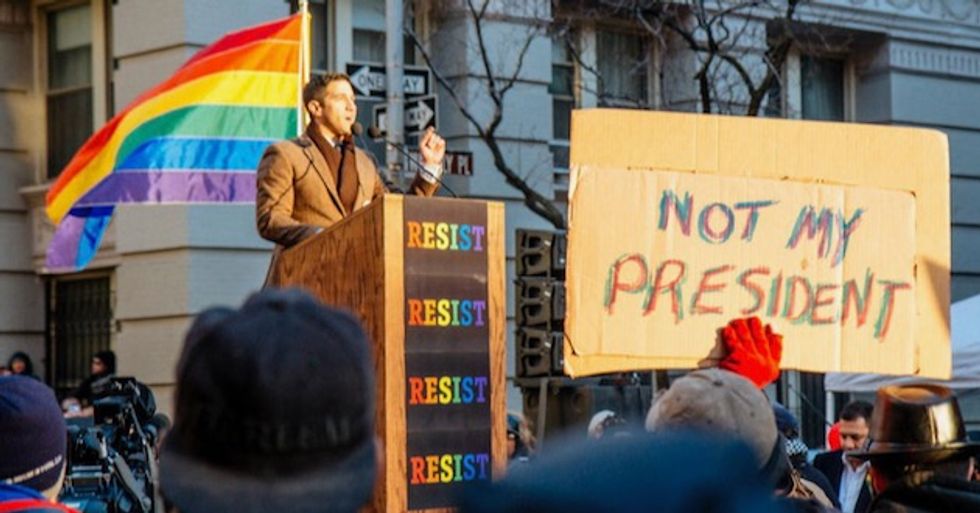 LGBT Solidarity Rally in front of the Stonewall Inn in solidarity with every immigrant, asylum seeker, refugee and every person impacted by Donald Trump's illegal, immoral, unconstitutional and un-American executive orders.

President Donald Trump's self-promotional and self-congratulatory tweets recognizing – for his first time ever – LGBT Pride month are eliciting anger, hurt, and outrage from members of the LGBT community, activists, and supporters.

"As we celebrate LGBT Pride Month and recognize the outstanding contributions LGBT people have made to our great Nation, let us also stand in solidarity with the many LGBT people who live in dozens of countries worldwide that punish, imprison, or even execute individuals on the basis of their sexual orientation," Trump's tweets began.

The head of HRC called it "gross hypocrisy."

The head of GLAAD called it "gaslighting."

This is gaslighting. Trump and his Administration have attacked the LGBTQ community in policy and rhetoric more tha… https://t.co/rn9yXLgeYk
— Sarah Kate Ellis (@Sarah Kate Ellis) 1559331362.0

The Department of Justice under Trump argued in support of baker who denied service to a gay couple during the Supr… https://t.co/VmRUY7nw2t
— GLAAD (@GLAAD) 1559333880.0

Some have taken to posting screenshots of or links to GLAAD's database of anti-LGBT attacks made by Trump and his administration:

Don't you fucking dare talk about "solidarity with the many LGBT people" when your administration is undermining po… https://t.co/16u1CTdZw6
— Joe Sudbay (@Joe Sudbay) 1559331986.0

Some took a more humrous approcah:

And some demanded action:

Image by mathiaswasik via Flickr and a CC license