Trump's toxic brand has caused Trump Tower condo prices to crash: No one wants to buy 'in that building' 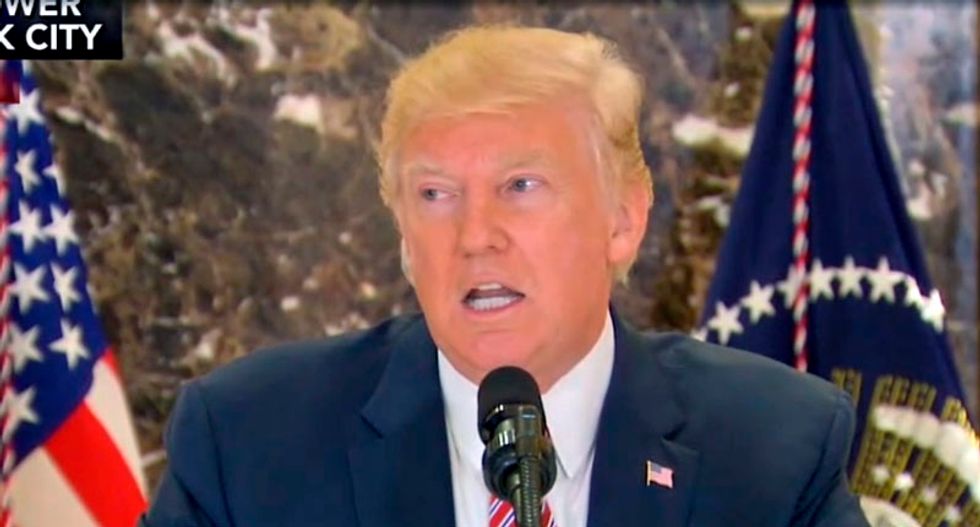 President Donald Trump is not a popular man in his home state of New York -- and condo prices at his signature Trump Tower in Manhattan are reflecting just how toxic his brand has become.

Bloomberg News reports that most of the Trump Tower condos that have gone on the market since 2016 have been sold at a lost. In fact, property records show that "several" Trump Tower condos have sold at losses of more than 20 percent.

Michael Sklar, who sold his parents' Trump Tower condo at a loss when adjusted for inflation, tells Bloomberg that it's very hard for condo owners to find willing buyers.

"No one wants in that building," he explained. "The name on the building became a problem."

In total, Bloomberg found that Trump Tower's occupancy rate has plunged from 99 percent to just 83 percent over the past seven years, meaning it has "a vacancy rate that’s about twice Manhattan’s average."

However, the building is still staying afloat financially thanks in part to the Trump 2020 campaign committee spending in the building. According to Bloomberg, the committee "has spent more than $890,000 over the last two years to rent space in Trump Tower."

What does the Perot phenomenon tell us about Andrew Yang's third party prospects?

Mass discontent is growing once again in the United States. In a recent survey conducted by AP-NORC, 85 percent of Americans said the country is headed in the wrong direction. That is the highest percentage recorded in the last 50 years, and it makes one wonder what the political establishment, or anyone else for that matter, is going to do about it.

In a recent New York Times opinion piece, columnist David Brooks suggested that “if there ever was a moment ripe for a Ross Perot-like third candidate in the 2024 general election, this is that moment.” Brooks is by no means speaking in hyperbole, as the majority of the American people seem to be in agreement with him on the issue of a third party or outsider candidate. Back in February, Gallup released a poll which showed that 62% of U.S. adults said that the two major “parties do such a poor job representing the American people that a third party is needed.”

Marina Ovsyannikova, who denounced Russia's intervention in Ukraine during a live TV broadcast, knew that coming back to Moscow would be akin to playing a game of Russian roulette.

Speaking to AFP in an interview, the 44-year-old mother of two, who returned from Europe last month, said she understood she could be arrested at any moment.

Taiwan woman gets life sentence over blaze that killed 46

A Taiwanese woman who set off the island's deadliest fire in decades to get back at her boyfriend escaped the death penalty Friday as the court handed down a life sentence.

Last October's inferno in the southern city of Kaohsiung raged through multiple floors of a dilapidated 13-story apartment block for hours, killing 46 people and injuring 41.