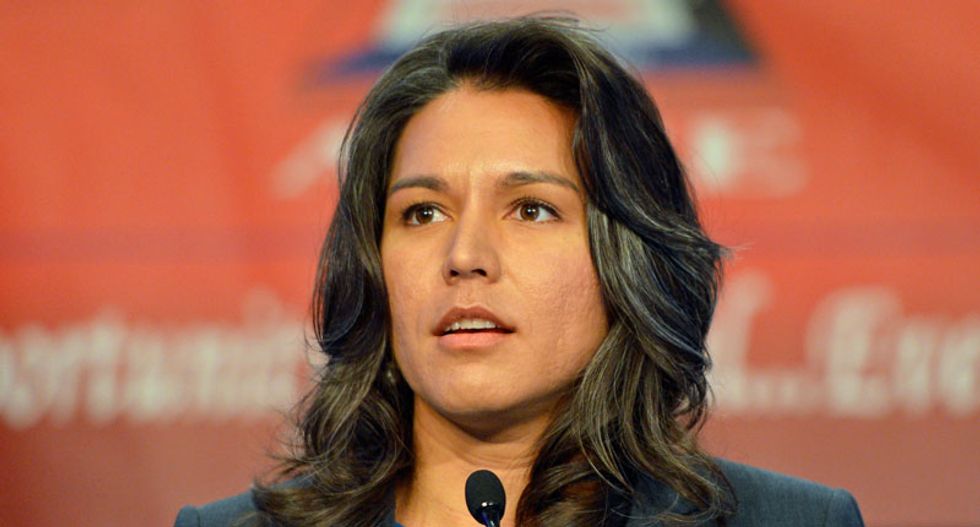 On Saturday, the Huffington Post profiled Niko House, a prominent supporter of the presidential campaign of Rep. Tulsi Gabbard (D-HI). House, a North Carolina Army veteran and former fellow at the Sanders Institute who managed to attract 716 contributors as part of the Gabbard campaign's digital fundraising outreach, has previously appeared onstage at a Gabbard campaign event in Los Angeles, and is set to have dinner with the congresswoman as the fundraiser with the most recruits.

He is also, according to the Huffington Post, a purveyor of numerous toxic conspiracy theories.

Among House's beliefs are that Pizzagate is real, that murdered DNC staffer Seth Rich was behind the leak of emails to WikiLeaks instead of Russia, that Syrian dictator Bashar al-Assad is innocent of gassing civilians, that Bill Cosby was framed for rape, that the CIA staged the Las Vegas shooting to protect Harvey Weinstein from allegations of sexual assault, that Ben Affleck and Matt Damon are both U.S. intelligence assets, and that Chester Bennington, the lead singer of Linkin Park who took his own life last year, could be the "bastard child" of former Hillary Clinton campaign chairman John Podesta.

Perhaps most disturbing of all, House has expressed sympathy for Cesar Sayoc, the Florida Trump supporter who is accused of mailing a series of pipe bombs to prominent Democratic politicians and donors. "I can't say if I would be upset if they got hurt," said House of Sayoc's would-be victims. "I would be like, 'Yo, you shouldn't be sending bombs to people's houses because of collateral damage and other people could get hurt.' But I don't feel bad for you getting a bomb sent to your house. I refuse to trick myself into being sympathetic toward warmongering sociopaths, and that includes George Soros, possibly more than any of them."