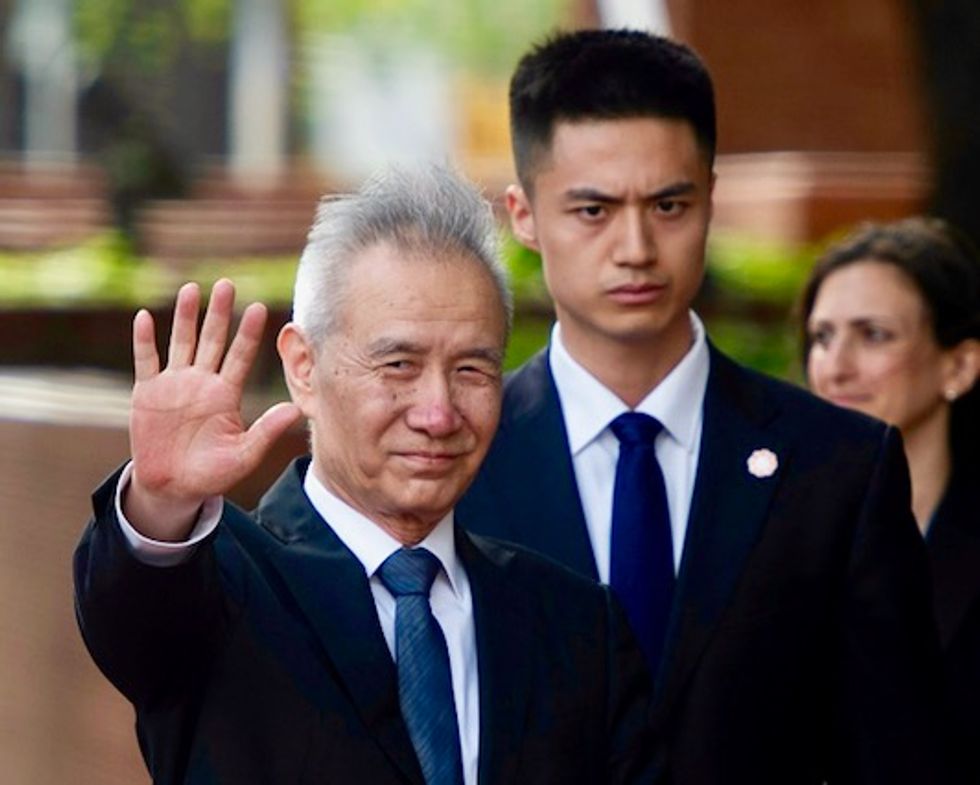 The United States pulled the trigger Friday on a steep increase in tariffs on Chinese products and Beijing immediately vowed to hit back, turning up the heat before a second day of trade negotiations.

President Donald Trump got a briefing from his trade negotiators after the first day of talks with the Chinese side on Thursday, but made no move to hold off on the tariffs -- dashing hopes there might be a last-minute reprieve as the negotiations continued.

Minutes after the US increased punitive duties on $200 billion in imports from 10 to 25 percent, the Chinese commerce ministry said it "deeply regrets" the move and repeated its pledge to take "necessary countermeasures", without elaborating.

Locked in a trade dispute for more than a year, officials from the world's two biggest economies returned to the bargaining table late Thursday, led by Chinese Vice Premier Liu He, US Trade Representative Robert Lighthizer and US Treasury Secretary Steven Mnuchin.

Since last year, the two sides have exchanged tariffs on more than $360 billion in two-way trade, gutting US agricultural exports to China and weighing on both countries' manufacturing sectors.

Trump began the standoff because of complaints about unfair Chinese trade practices.

The US team met with Trump late Thursday night to brief him and "agreed to continue discussions" on Friday, the White House said in a statement.

Lighthizer and Mnuchin met the Chinese delegation for about 90 minutes Thursday evening and they had a working dinner with Liu.

"We hope the US and the Chinese side can meet each other halfway and work hard together to resolve existing problems through cooperation and consultation," the Chinese commerce ministry said in a statement.

Despite optimism from officials in recent weeks that the talks were moving towards a deal, tensions reignited this week after Trump angrily accused China of trying to backpedal on its commitments.

"They took many, many parts of that deal and they renegotiated. You can't do that," Trump said on Thursday.

But he held out hopes of salvaging a deal.

"It's possible to do it," Trump said. "I did get last night a very beautiful letter from President Xi (Jinping)."

At the same time, he said he would be happy to keep tariffs in place. And he has threatened to extend the tough duties to all Chinese goods.

"While we believe that a trade deal will eventually be reached between the US and China, the risk of a complete breakdown in trade talks has certainly increased," Taylor said.

Liu said on his arrival in Washington that the prospects for the talks were "promising," but warned that raising tariffs would be "harmful to both sides," and called instead for cooperation.

"I hope to engage in rational and candid exchanges with the US side," he told Chinese state media.

"Of course, China believes raising tariffs in the current situation is not a solution to the problem, but harmful to China, to the United States and to the whole world."

But due to a quirk in the implementation of the higher tariffs, products already on ships headed for US ports before midnight will only pay the 10 percent rate, US Customs and Border Protection explained.

That could effectively provide a grace period for the sides to avert serious escalation.

"While we are disappointed that the stakes have been raised, we nevertheless support the ongoing effort by both sides to reach agreement on a strong, enforceable deal that resolves the fundamental, structural issues our members have long faced in China," said business lobby the American Chamber of Commerce in China.

The US is pressing China to change its policies on protections for intellectual property, massive subsidies for state-owned firms, and reduce the yawning trade deficit.

Derek Scissors, a China expert at the American Enterprise Institute, said the two sides had clashed over how much of the final trade agreement should be enshrined in a public document, something Beijing has long resisted.

"What the Chinese step-back primarily says is they don't want to publicly acknowledge that their existing laws, especially on IP, are flawed," he told AFP.

Washington is counting on the strong US economy to be able to withstand the impact of higher costs from the import duties and retaliation better than China, which has seen its growth slow.

It is "within a controllable range", the advisor Ma Jun said.

Trump has suggested he may try to form his own political party, one that he will use to be a type of shadow president or political crime family boss who extorts the Republican Party to do his bidding. Trump's forces will also continue their war against nonwhite people and multiracial democracy. As Trump both promised and threatened in his farewell announcement to his followers, "We will be back in some form."

The American far right is angry: Angry at Joe Biden, angry at Donald Trump, angry at the enigmatic "Q" and angry with themselves.

The online postings and chatrooms of extremists have been brimming with disappointment and dissent since the failed January 6 insurrection against Congress and the inauguration of Joe Biden as president.

When Brianna Titone first ran for a seat in the Colorado House of Representatives, she was viewed as an unlikely candidate, and her opponents didn't bother to say much about her being a transgender woman.

But after winning the seat in an upset and becoming the first transgender legislator in state history, a rival lawmaker voiced robocalls claiming Titone "wants to force a radical sexual agenda on every Coloradan."