US sends naval strike group as tensions rise with Iran 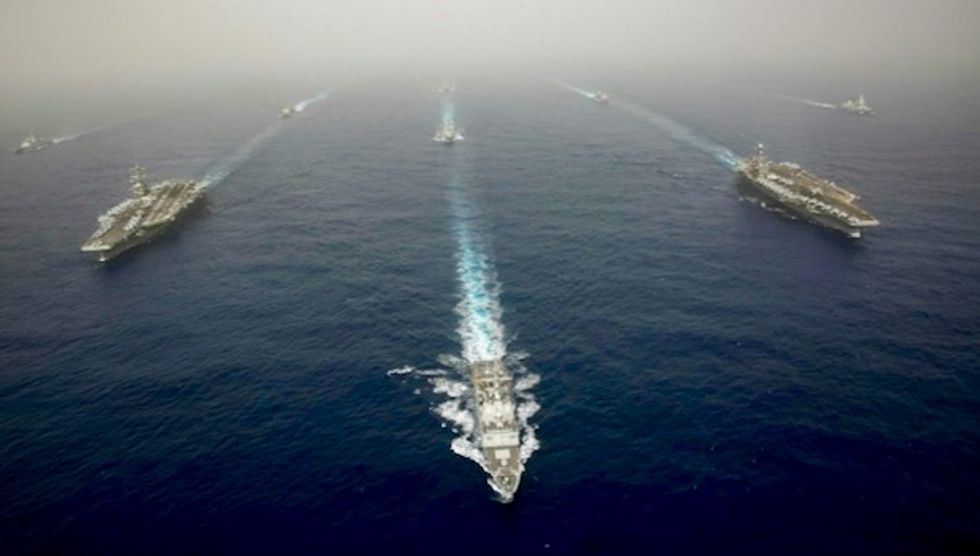 The US aircraft carrier USS Abraham Lincoln, on the left, sails in formation in the Mediterranean alongside British, French, Spanish and other US warships last month in an image released by the US Navy Navy Office of Information/AFP/File / Jeremiah Bartelt

The United States is deploying an amphibious assault ship and a Patriot missile battery to bolster an aircraft carrier and B-52 bombers already sent to the Gulf, ratcheting up pressure Saturday on archfoe Iran.

The carrier and a B-52 bomber task force were ordered towards the Gulf, as Washington reiterated that intelligence reports suggested Iran was planning some sort of attack in the region.

CENTCOM, the US forces for the Middle East and Afghanistan, said Friday on Twitter that the B-52 bombers arrived at the area of operations on May 8, without saying where they had landed.

US President Donald Trump's national security advisor John Bolton has said the deployment aimed to send a "clear and unmistakable" message to Iran about any attack against the US or its partners in the region.

Washington has not elaborated on the alleged threat, drawing criticism that it is overreacting and unnecessarily driving up tensions in the region.

There was no immediate reaction from Tehran on the latest US moves, but earlier in the week it shrugged off the carrier deployment.

The increasing tensions come as Tehran said Wednesday it had stopped respecting limits on its nuclear activities agreed under a 2015 deal with major powers.

Iran said it was responding to the sweeping unilateral sanctions that Washington has re-imposed since it quit the agreement one year ago, which have dealt a severe blow to the Iranian economy.

The Pentagon, for its part, said the deployments were "in response to indications of heightened Iranian readiness to conduct offensive operations against US forces and our interests".

"The Department of Defence continues to closely monitor the activities of the Iranian regime, their military and proxies," it said.

"The United States does not seek conflict with Iran, but we are postured and ready to defend US forces and interests in the region."

Amid the rising tensions, Trump said Thursday he was open to talks with Tehran's leadership.

"We don't want them to have nuclear weapons -- not much to ask," he said.

In the latest of a series of escalating statements, however, Secretary of State Mike Pompeo the same day threatened a "swift and decisive" US response to any attack by Iran.

"Our restraint to this point should not be mistaken by Iran for a lack of resolve," he said, adding however: "We do not seek war."

In May last year, Trump pulled the United States out of an agreement aimed at curtailing Iran's nuclear ambitions and reinstated unilateral economic sanctions.

On Wednesday, President Hassan Rouhani said Iran would no longer implement parts of the deal and threatened to go further if the remaining members of the pact, including the European Union, failed to deliver sanctions relief to counterbalance Trump's renewed assault on the Iranian economy within 60 days.