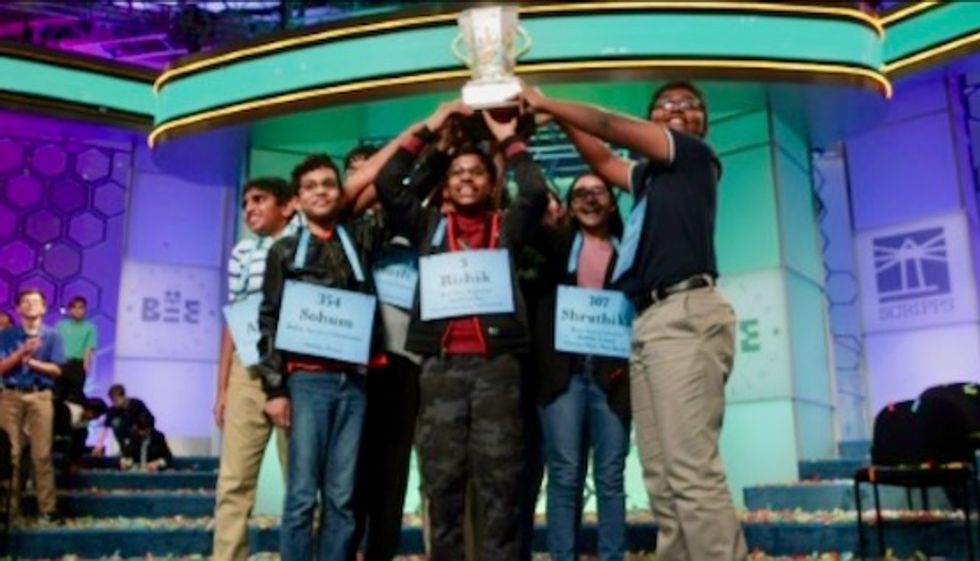 Each of the eight winners will receive a $50,000 cash prize GETTY IMAGES NORTH AMERICA/AFP

The world's premier spelling bee has ended in an unprecedented eight-way tie after hours of intense competition among American youngsters tackling some of the English language's most obscure words.

Texas seventh-grader Rohan Raja became the eighth and final winner of the National Spelling Bee's 92nd annual competition on Thursday after a correct recital of the word "odylic", earning a wild round of applause from the audience.

He hoisted the trophy with the seven other kids to survive the final round after successfully spelling a slate of tongue-twisters, including auslaut, erysipelas, bougainvillea, aiguillette, pendeloque, palama and cernuous.

The winners were "the most phenomenal assemblage of spellers in the history of this storied competition", said the bee's long-time official pronouncer Jacques Bailly.

Each will receive a $50,000 cash prize in addition to their own trophies, organizers said.

An American institution, the Scripps National Spelling Bee brought together more than 550 spellers from all over the country aged between seven and 14.

They were the elite among millions of youngsters, typically aged nine through 15, who competed in local and regional spelling bees this past school year.

The competition has only tied six times in its history, though four titles in the last six years ended with a draw.

Seven of the eight winners are of Indian ancestry -- a reflection of the popularity of competitive spelling among Indian immigrant families.

This was the twelfth year in a row that American youngsters of South Asian heritage clinched the title.