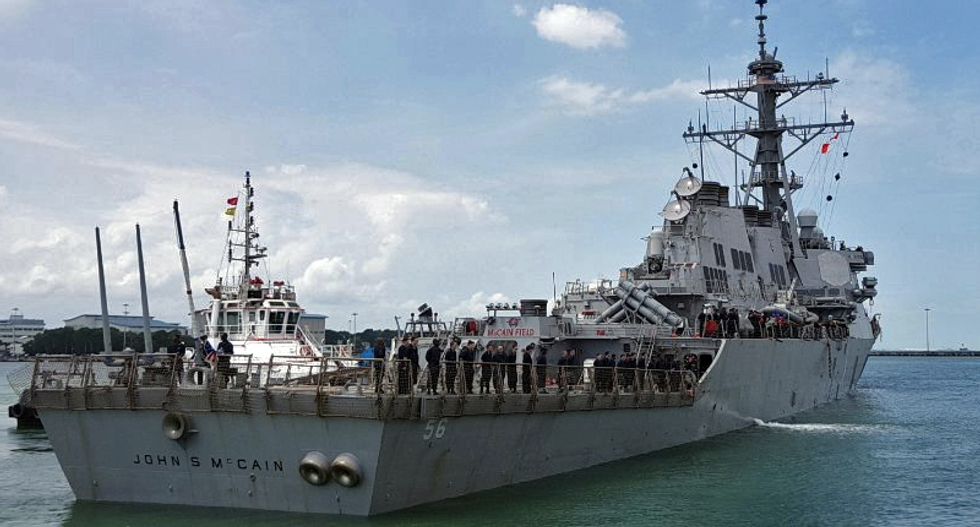 The Arleigh Burke-class guided-missile destroyer USS John S. McCain arrives at Changi Naval Base, Singapore, following a collision with the merchant vessel Alnic MC while underway east of the Straits of Malacca and Singapore, Aug. 21, 2017. Significant damage to the McCain’s hull resulted in flooding to nearby compartments, including crew berthing, machinery and communications rooms. Damage control efforts by the crew halted further flooding. The incident will be investigated. U.S. Navy photo by Petty Officer 2nd Class Joshua Fulton

President Donald Trump and the Navy Chief of Information are both denying a Wall Street Journal report that the USS John McCain was "ordered" to be concealed during the president's trip to Japan.

"The name of USS John S. McCain was not obscured during the POTUS visit to Yokosuka on Memorial Day. The Navy is proud of that ship, its crew, its namesake and its heritage," the Navy said in a statement.

But according to Washington Post reporter Josh Dawsey, the Wall Street Journal has copies of the emails and they're happy to publish them.

"WSJ has emails, their publishing standards are quite high, other admin officials confirm it and ⁦⁦@rebeccaballhaus⁩ is a terrific reporter. So just read the story," tweeted Dawsey.

Trump tweeted that he wasn't informed about the ship, which is entirely possible. His staff has a tendency to insulate and protect him.

CNBC obtained a copy below:

Two sources confirm to @CNBC that this is the email showing coordinated efforts to put the USS John McCain “out of… https://t.co/cEI3hwoPe2
— Amanda Macias (@Amanda Macias)1559187301.0

You can read the full Wall Street Journal report here.