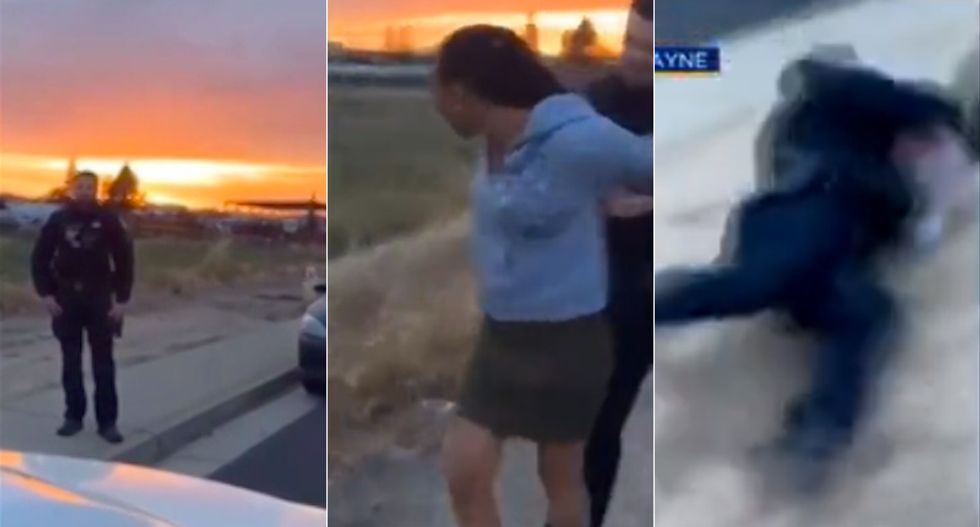 Images from a cell phone video that show a police officer body slamming a woman.

On Sunday, Rio Vista, California police pulled over a woman for driving with expired tags. She'd been on her way to a family event, and when her mother heard about the police stop, she arrived at the scene to see what was happening, reports CBS 13.

“A lot of questions he didn’t like and he didn’t want to answer and he was very aggressive,”  said Deshunna Payne, who'd asked the officer why all four occupants of the car had been detained.

From there, the situation escalated, as family members sought to record the incident while the officers told them to stop.

In the video, the officer lunges at the young woman and tackles her, prompting the family to accuse him of using excessive force.

Sacramento County Sheriff John McGinnis was shown the video by CBS13, but he didn't make determination.

“The critical fundamental question is what is the basis upon which that decision was made? Was it improper-was it unreasonable?” McGinnis said.

The police department issued a statement.

On Sunday May 5, 2019 at around 7:43PM, Rio Vista Police Officers stopped a car for registration that had been suspended by the Department of Motor Vehicles for two years. After confirming the suspended registration, officers informed the driver, identified as Mea Thomas, that her vehicle would be towed pursuant to Vehicle Code 22651(o). Mea Thomas told officers that they could not tow the car and refused to exit the car.

Officers were able to detain two passengers from the car without incident. While officers were detaining the passengers, a second car with other family members arrived at the vehicle stop and two females began confronting officers. The occupants of the second car, Deshaunna Payne and Cherish Thomas, refused repeated directions and commands to remain at their car and not interfere with the original stop. At this point, the two officers were now confronted with five uncooperative people.

Deshaunna Payne and Cherise Thomas again approached both officers and refused several commands to return to their car and stop interfering with the original vehicle stop. They repeatedly approached the officers and attempted to push past them to get near the car and people originally detained in the vehicle stop.

Cherise Thomas tried to walk around an officer to get back to the original vehicle stop. The officer informed her several times that she could not go back to the original vehicle stop. She pushes past him and as he tried to stop her, she pushed the officer. The officer directed her to stop and place her hands behind her back. She refused and tried to pull away. The officer tried to control both of her arms and as he did so, Deshaunna Payne approached him and tried to strike him. As Cherise continued to resist and refused to comply, the officer tackled her to the ground in order to gain control of her while his partner stepped in to take Deshaunna Payne into custody. A short time later, a third car arrived with additional family members who were also confrontational and uncooperative.

Assistance was requested from the Solano and Sacramento County Sheriff Offices due to the number of uncooperative people involved and their continuous confrontational behavior.

As Cherise Thomas and Deshaunna Payne were being handcuffed, Michal Ivy and/or Mea Thomas who were originally detained in a patrol car attempted to escape by kicking at the door and window causing damage to the door and protective screen over the window. They were both arrested.

Four people were arrested as a result of this incident:

Cherise Thomas of Rio Vista for resisting arrest, obstructing or delaying an investigation and public intoxication;

Deshaunna Payne of Rio Vista for resisting arrest, obstructing or delaying an investigation;

Mychal Ivy of Rio Vista for felony vandalism and violation of probation; and,

Mea Thomas of Rio Vista for resisting arrest, obstructing or delaying an investigation and felony vandalism.

Body camera footage from both officers will be made available to the media within the next couple of days to show the totality of this situation.

An internal investigation into the use of force will be conducted, which is standard procedure in a use of force incident such as this.