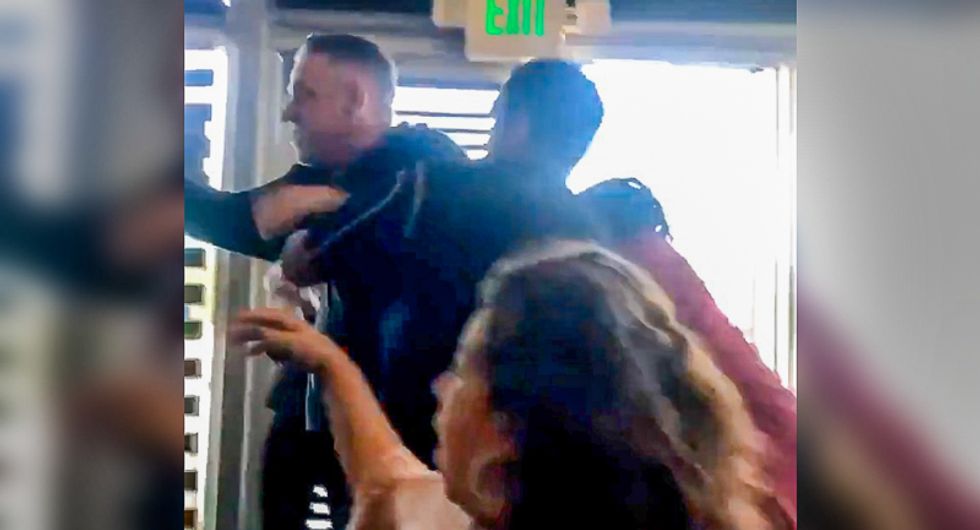 A scuffle reportedly broke out at a Los Angeles area restaurant on Sunday after a white man became impatient and referred to a black customer as "monkey man."

The video, which was posted to Reddit on Monday, had nearly 30,000 "upvotes" by Tuesday.

A Twitter user named @IvanCyclist claimed responsibility for the video and posted a message explaining what happened.

According to the account, the white man became angry at the restaurant's hostess because people with reservations were seated ahead of him.

"At one point calling the hostess a 'dumb bitch' for requesting him again to wait to be seated," the witness wrote. "He doesn't understand the modern waitlist... A shouting match ensues between the guy (white) and two other patrons (black)... You can hear the white guy shouting racial remarks at them repeatedly."

The words "monkey man" can be heard on the video.

At one point, the white man charges into the restaurant and his pushed back by customers. Soon after, a black woman can be seen punching the white man four or five times before the video ends.

"This is when the Black Female lands 5, yes FIVE clean shots to the man's face," the Twitter message adds.

In the end, police were said to have charged the man causing the disruption with four citations. The black woman who hit him reportedly received one citation.

Took my mom out to Sushi for Mother’s Day in LA. It was going great until a crazy racist white man started trouble… https://t.co/kHvqOTDlkF
— Ivan Velasco (@Ivan Velasco) 1557799587.0