WATCH: Trump-loving British right-winger gets doused with a milkshake by anti-racism protester 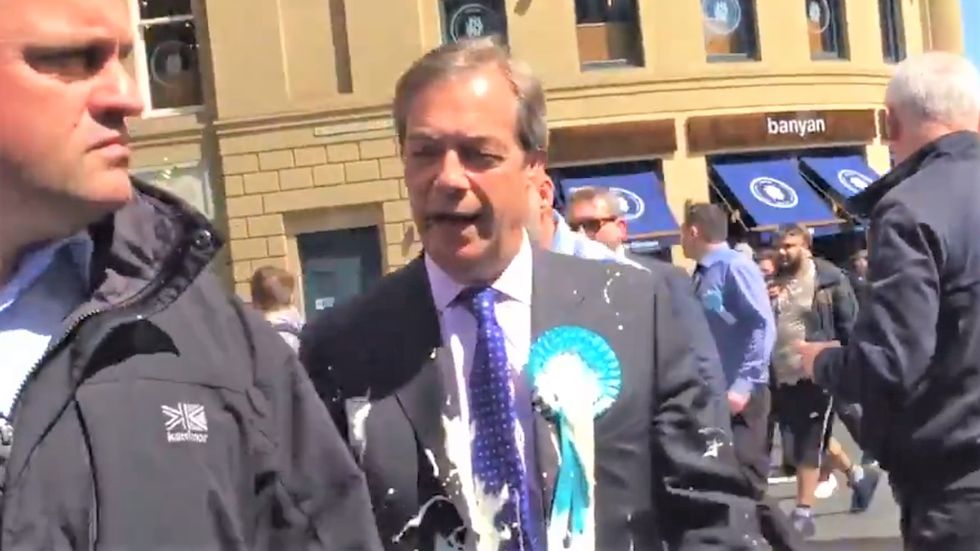 Nigel Farage after getting doused in a milkshake (Screen cap).

Trump-loving U.K. politician Nigel Farage on Monday became the latest high-profile far-right figure to find himself on the receiving end of a milkshake bath.

Scotland's The Herald reports that a 32-year-old man named Paul Crowther on Monday doused Farage with the milkshake he was holding while the politician was talking with voters in the city of Newcastle.

In a video posted by The Herald, Farage is seen talking with a couple of voters before moving away from them. As he's walking away, Crowther approaches and quickly dumps his milkshake all over Farage's suit.

Crowther was subsequently taken away in handcuffs by law enforcement officials, witnesses said.

In an interview with The Herald, Crowther said that he wasn't originally planning on dousing Farage and claimed that he saw the former UKIP leader in a chance encounter.

"I didn’t know he was in town, I thought this is my only chance," he said. "The bile and the racism he spouts out in this country is far more damaging than a bit of milkshake to his front."

Multiple far-right figures in the U.K. have been doused with milkshakes in recent days, including UKIP’s Carl Benjamin and ex-English Defense League leader Tommy Robinson.

📹 @Nigel_Farage has been doused in milkshake during a campaign walkabout in Newcastle. https://t.co/hHogu9vSHB https://t.co/gvXgzvqHGS
— The Herald (@The Herald) 1558356604.0