After Oregon Republicans scurry off to avoid voting on climate bill, Governor Kate Brown sends state police to bring them back 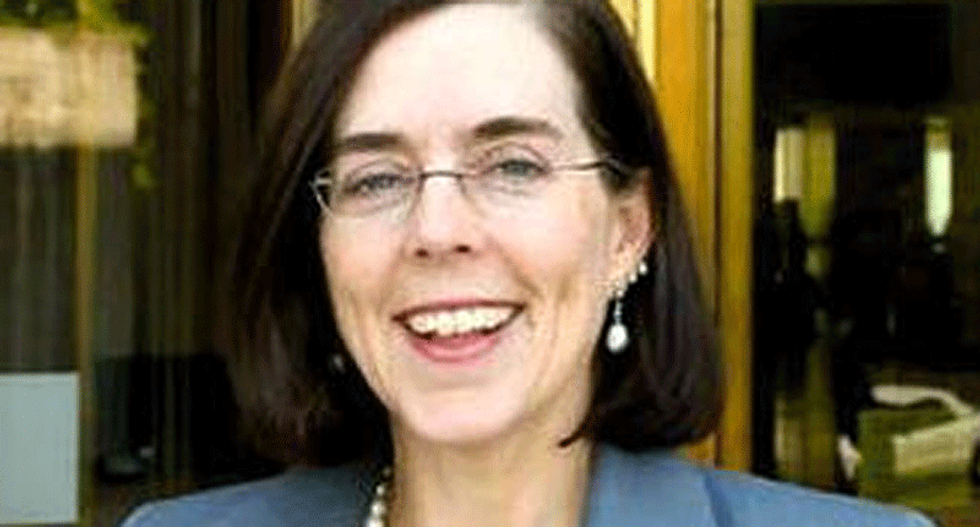 "It is absolutely unacceptable that the Senate Republicans would turn their backs on their constituents who they are honor-bound to represent here in this building."

The prospect of mitigating the climate crisis sent Oregon state Senate Republicans scurrying into hiding Thursday, fleeing a vote that would place strong restrictions on emissions in the state.

On Friday, Governor Kate Brown ordered the Oregon State Police to locate the 11 senators and bring them back to do their jobs.

"I am authorizing the state police to fulfill the Senate Democrats' request," said Brown in a statement. "It is absolutely unacceptable that the Senate Republicans would turn their backs on their constituents who they are honor-bound to represent here in this building. They need to return and do the jobs they were elected to do."

State GOP lawmakers disappeared from the capital on Thursday rather than vote on the bill, denying the state Senate the 20 members it would need for a quorum. There are 18 Democrats in the chamber, 11 Republicans, and one vacant seat. The Republican flight came after Brown, on Wednesday, threatened to send police to force the senators into session.

In response to Brown's ultimatum, state Senator Brian Boquist, a Republican from Tillamook, appeared to threaten the lives of any police officers that might come to arrest him.

"Send bachelors and come heavily armed," said Boquist. "I'm not going to be a political prisoner in the state of Oregon. It's just that simple."

In a floor speech Thursday, Senate President Peter Courtney, a Democrat, pleaded with his erstwhile colleagues to come back.

On Friday, however, left with what they saw as no other option, Courtney and his colleagues did just that.

According to The New York Times, Thursday was the second time in six weeks Republicans have scampered away from the floor in an attempt to stop a vote on a bill the GOP hates:

Using a market-based approach to lower greenhouse gas emissions, the bill would place limits on the amount of emissions that businesses, including utilities and other industrial facilities, could lawfully emit. Under those limits, emissions would be significantly reduced by 2035. By 2050, the bill mandates an 80 percent reduction in emissions from 1990 levels.

The Republican senators are out of state, according to local reporting, and, in an escalation of tensions, now have extreme right-wing group the Three Percenters behind them. In a statement, the far-right militant group said that they were willing to "stand together with unwavering resolve, doing whatever it takes to keep these senators safe."

In comment to Oregonian reporter Hillary Borrud, the missing Republicans said they were not interested in help from the militia.

"The senators are not with any militias and are not accepting their help," Senate Republican spokeswoman Kate Gillem told Borrud.

Three of 17 North Americans kidnapped in Haiti in October have been freed, their church group said on Monday.

The missionaries and family members -- a group of 16 Americans and one Canadian -- were abducted while returning from an orphanage in an area east of the capital Port-au-Prince controlled by one of Haiti's most powerful crime gangs.

Former employees have spoken with The New York Times to reveal automaker Elon Musk may have undermined safety in designing its Autopilot driver-assistance system to fit its chief executive’s vision.

"Unlike technologists at almost every other company working on self-driving vehicles, Mr. Musk insisted that autonomy could be achieved solely with cameras tracking their surroundings. But many Tesla engineers questioned whether it was safe enough to rely on cameras without the benefit of other sensing devices — and whether Mr. Musk was promising drivers too much about Autopilot’s capabilities," writers Cade Metz and Neal E. Boudette mused in the story.