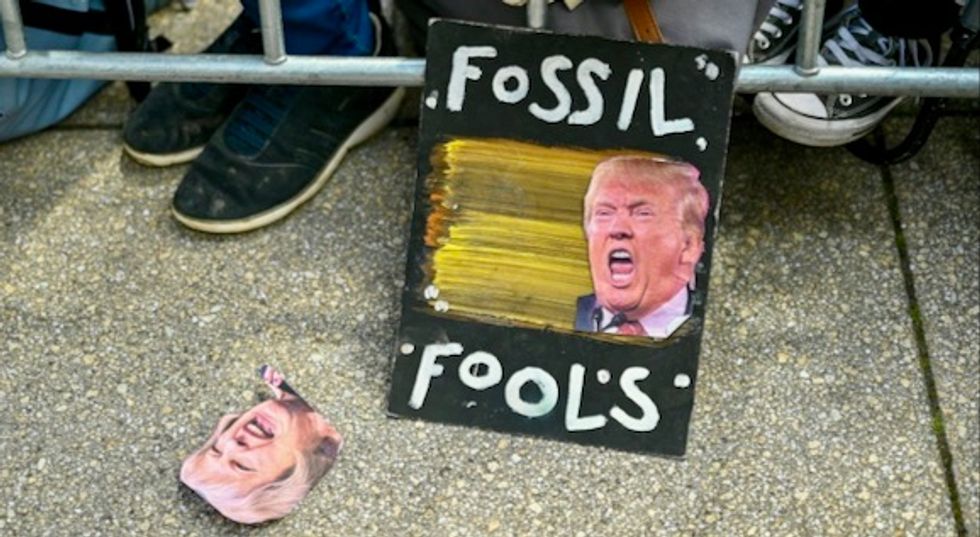 Teenage demonstrators participate in an international Fridays for Future march on June 21, 2019 in Aachen, Germany. Thousands of protesters from across Germany and other countries in the region joined the march, which coincided with a United Nations climate conference in nearby Bonn. (Photo: Sascha Schuermann/Getty Images)

While cities across Europe faced public safety alerts amid record-breaking heatwaves, two weeks of climate talks by nearly 200 delegations in Bonn, Germany wrapped up on Thursday with the negotiations marked by obstruction and climate denial by the United States and other oil-friendly countries rather than a sense of urgency.

The U.S. and Saudi Arabia led the effort to water down an official concluding statement to the Bonn Climate Change Conference as they objected to mentioning the risks of rising greenhouse gas emissions and were instrumental among the group of oil-producing countries in calling into question the U.N.'s findings about the need to limit the temperature rise to 1.5º Celsius.

"A growing number of governors, mayors, business leaders, investors, and others around the world are committing to rapid, transformational climate action. By contrast, here in Bonn, there wasn't much ambition to be found."

—Alden Meyer, UCS"The report came out in October of 2018 and now we see this move at the negotiations to try and have it almost erased from existence, which is impossible to do," Lois Young, Belize's ambassador the U.N., told the BBC.

"Saudi Arabia is the main protagonist in this attack on science, although the U.S. has come to its aid," Oxfam's Jan Kowalzig told Deutsche Welle.

The oil-producing countries also fought the drafting of official documents including the IPCC's findings that carbon emissions must be reduced by 45 percent by 2030.

Critics noted that even as powerful countries were obstructing meaningful progress, temperatures were as high as 104 degrees Fahrenheit in Paris and Berlin.

"There's no indication it's spilling over to create more urgency here in these negotiations," Alden Meyer of the Union of Concerned Scientists (UCS), told Bloomberg News of the local climate. "It's almost like another world here."

"A growing number of governors, mayors, business leaders, investors, and others around the world are committing to rapid, transformational climate action," he added in a statement. "By contrast, here in Bonn, there wasn't much ambition to be found."

However, Meyer said, "while they may have succeeded in short-circuiting formal discussion of the report, the Saudis can't prevent scientific fact from continuing to drive the heightened awareness among governments, the business community and the public of the need for an urgent response to the climate crisis."

The conference was also unable to reach an agreement on how to implement the Sustainable Development Mechanism, the program required under the Paris climate agreement of 2015 to support developing countries, many of which are on the frontlines of the climate crisis.

Debate over the program was pushed to next December, when delegates will meet for the 25th Conference of the Parties (COP25) in Santiago, Chile.

"It's unreal, it's as though they're resigning our Alliance of Small Island States to collateral damage," Young told the BBC. "It's like we have no importance."

Switzerland supported the delegation of smaller nations that pushed back against the oil-producing countries' denial of climate science, with Swiss negotiator Franz Perrez wearing a shirt reading, "Science is not negotiable" to one of the meetings.

Critics also questioned how delegates who support the IPCC's findings could be expected to make progress, considering the presence at the meetings of a trade organization representing fossil fuel interests.

The 47 delegates in the Least Developed Countries voting bloc proposed the drafting of conflict of interest protections to stop polluters from influencing the talks—but the U.S., Australia, and the European Union blocked the proposal and hours of discussion on the subject were reportedly erased from the record.

"Despite the support from almost 50 countries and environmental groups around the world... obstruction mainly from the US and Australia blocked the establishment of a conflict of interest policy," Philip Jakpor of Environmental Rights Action told the AFP.

As the BBC reported, the E.U. has so far failed to commit to cutting carbon emissions to net zero by 2050, while a draft statement out of the upcoming G20 summit, beginning Friday in Japan, includes watered-down commitments to limit the warming of the planet through decarbonization.

The G20 draft may be the result of Japan's attempts to win the approval of the Trump administration on trade issues, the BBC reported.

"G20 countries have a moral responsibility to address the accelerating climate crisis, which requires immediately stopping investments in fossil fuels development," said Nicolò Wojewoda, 350.org’s Europe managing director, in a statement. "Rather than listening to fossil fuel lobbyists, G20 leaders should be listening to scientists, to young people striking from school to demand action, and to the communities resisting coal mines, new gas pipelines, or fracking in their neighborhood."