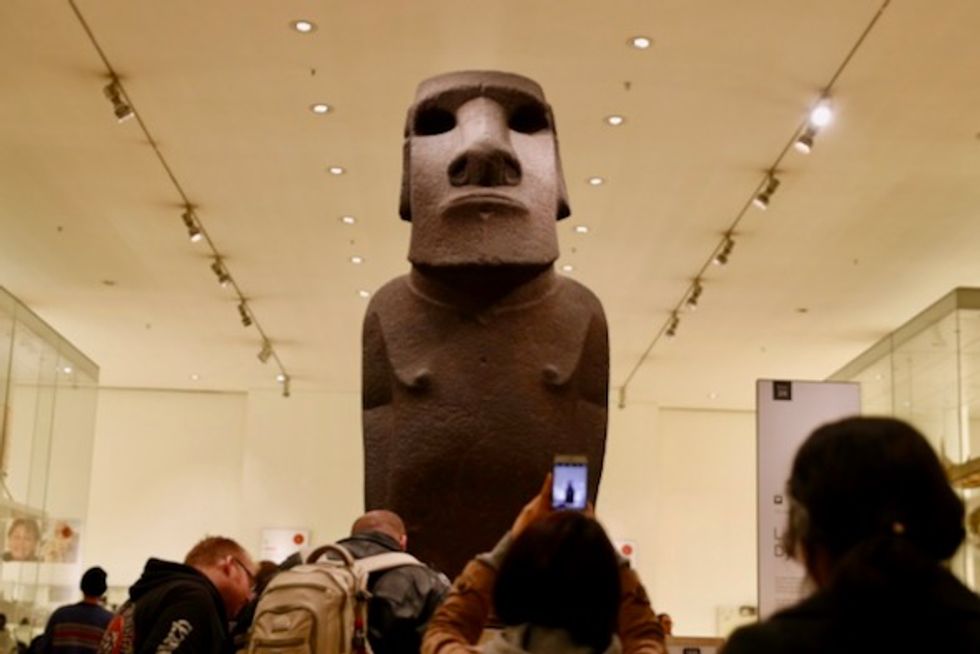 A team from the British Museum arrived Tuesday on Easter Island to meet with local Polynesian people seeking the return from London of one of the most spiritually important of the Chilean island's stone monoliths.

Gaye Sculthorpe, curator of the museum's Oceania section, and Lissant Bolton, an anthropologist specializing in the Pacific region, traveled to the South Pacific island 3,700 kilometers (2,300 miles) from the coast of Chile.

Its greatest tourist attraction are statues known as moai, which were sculpted from basalt more than 1,000 years ago.

The British Museum has held one of them, called the Hoa Hakananai'a, for 150 years.

The indigenous Rapa Nui people are now demanding its return, and have been in talks with the museum since last year.

For them, the statue contains the spirit of their people. The monolith stands 2.4 metres (2.6 yards) tall and weighs four tonnes.

Hoa Hakananai'a was taken without permission in 1868 by the British frigate HMS Topaze, captained by Richard Powell, and given to Queen Victoria.

The British Museum has faced numerous claims to return artifacts to the countries they originate from, including the Elgin Marbles to Greece and the Benin Bronzes to Nigeria.

The Rapa Nui people, who in 2017 gained self-administration over their ancestral lands on Easter Island, have launched a campaign to recover what they consider one of the most important statues of the nearly 900 scattered across the island.

With its scowling eyes, straight-lined mouth and paunchy profile, the monolith stands at the entrance to a gallery in the British Museum.

The moai is distinguished by carvings on the back depicting the island's birdman cult and other ceremonial aspects of Easter Island's enigmatic past.

The Rapa Nui believe it brought peace to the island around the year 1000, ending inter-tribal wars.

Bolton said the team had traveled to the island at local leaders' invitation, wanted to hear what they had to say and were eager to learn more about their culture, according to a statement from Chile's Ministry of National Assets.

A team of elders from the island and Chilean officials traveled to London in November, and proposed to the British Museum the idea of giving it a copy of the monolith in exchange for the original.

A fibre-based replica of the British Museum monolith, made in the US, is now being used as a model to make a copy in local stone by craftsmen in Chile.

Another idea under consideration is for the museum to make a long-term or even permanent loan of the statue to the island. But no deal has been reached.