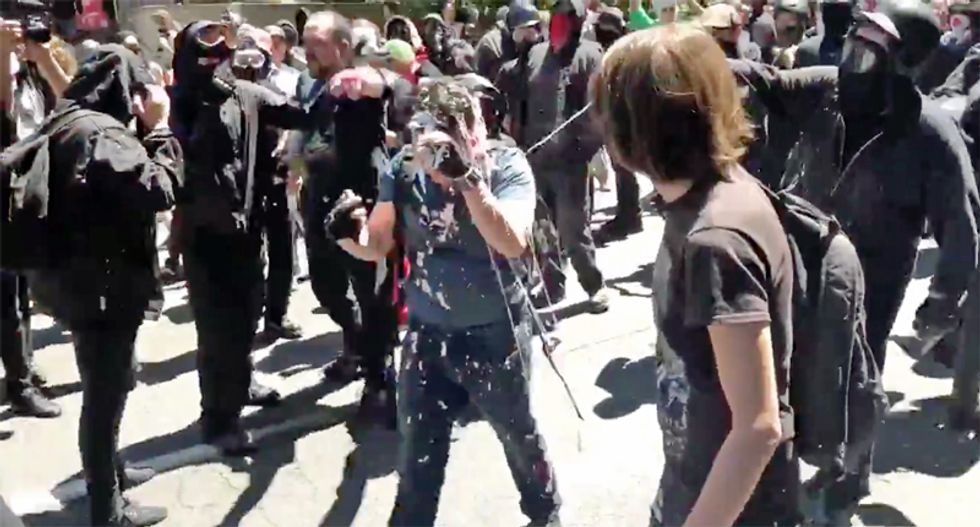 The streets of Portland were the scene of chaos and violence on Saturday after two right-wing protests.

Online postings indicate two right-wing demonstrations are scheduled for Saturday: one involving the Proud Boys, a fraternal organization known for street fighting, and another organized by conservative activist Haley Adams and the 'HimToo Movement,'" the Oregonian reported. "Counterprotesters, including supporters of Rose City Antifa, are planning to gather in opposition."

PPB advising this is now a civil disturbance and unlawful assembly. If you do not disperse, you are subject to arrest or use of force.
— Portland Police (@Portland Police) 1561846174.0

Members of “Portland’s Liberation” and “Him Too” movement are arguing with Antifa over who received the most injuri… https://t.co/YUhFhpOBKQ
— Jennifer Dowling (@Jennifer Dowling) 1561841075.0

There are milk stains around on the sidewalk along 6th Ave near Morrison from people who have had milk poured into… https://t.co/qs6jySY13i
— Everton Bailey Jr. (@Everton Bailey Jr.) 1561849747.0

Seems like things are wrapping up. The last of the right-wing group appears to have gone, and now the cops have pe… https://t.co/pfmcySS1lI
— Dave Killen (@Dave Killen) 1561850294.0