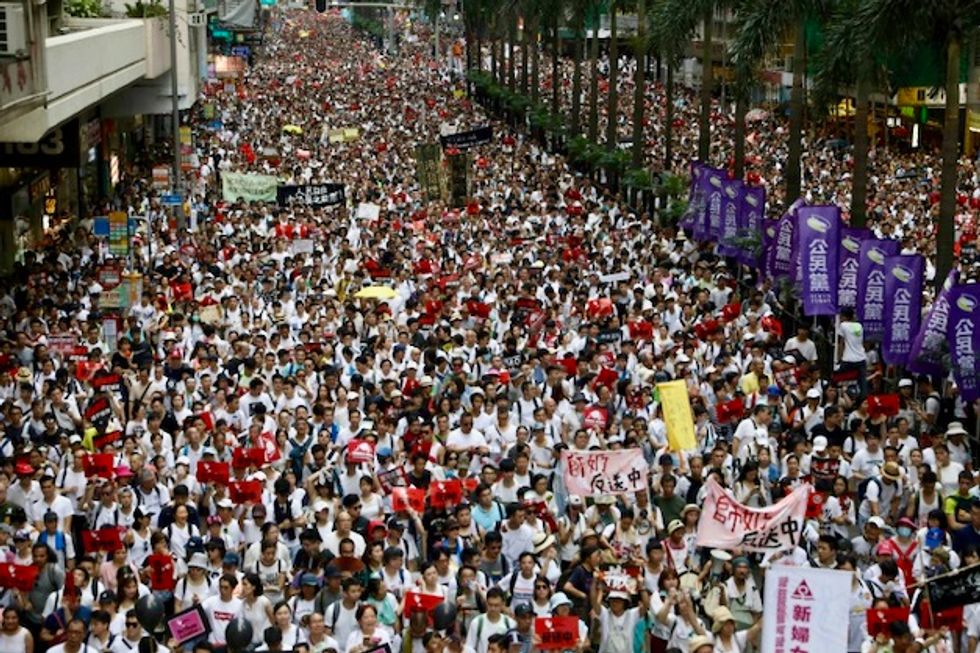 Huge crowds marched in blazing summer heat through the streets of Hong Kong in a noisy, colourful demonstration calling on the government to scrap its planned extradition law AFP / Dale DE LA REY

Chinese media on Monday blamed foreign interference over the huge protest that brought central Hong Kong to a standstill at the weekend, accusing opponents of the city's pro-Beijing government of "collusion with the West".

Organisers say more than a million people marched through the streets of the territory against a proposed new law that would allow extradition from Hong Kong to mainland China.

Opponents of the legislation say it would erode precious freedoms in the city and leave dissidents at the mercy of Beijing's opaque justice system.

The Chinese-language edition of the nationalistic Global Times dismissed Sunday's mass demonstration, one of the biggest shows of public anger since Hong Kong was returned to Chinese rule in 1997.

"It is very noteworthy that some international forces have significantly strengthened their interaction with the Hong Kong opposition in recent months," the paper said, describing the exchanges as "collusion".

The editorial pointed to meetings between Hong Kong opposition figures and US Secretary of State Mike Pompeo, as well as House Speaker Nancy Pelosi.

The English-language China Daily also played down the protest and focused on support for the proposed law.

An editorial in the paper said more than 700,000 people had backed the legislation through an online petition, "countering a protest by about 240,000 people" -- the more conservative attendance figure given by police.

"Unfortunately, some Hong Kong residents have been hoodwinked by the opposition camp and their foreign allies into supporting the anti-extradition campaign," the paper said.

But coverage in China was muted.

Sunday's main evening news broadcast by China's state broadcaster did not mention the protest, while the official Xinhua news agency's English-language service repeated the city administration's position on the law "in response to a public procession".

Searches for the demonstration on China's Twitter-like Weibo platform yielded no results, and instead showed older content about unrelated events.

A 50-year agreement between Hong Kong's former colonial ruler, Britain, and China means the city is guaranteed freedoms of speech and assembly unseen on the Chinese mainland.

But activists and opposition politicians are increasingly warning that these liberties are being eroded as Beijing tightens its grip on the city.

The proposed law being pushed by the territory's pro-Beijing leadership would allow extraditions to any country with which Hong Kong does not already have a treaty, including mainland China.

Supporters say the law is needed to stop the city becoming a safe haven for mainland fugitives, and it has said dissidents will not be extradited.

But critics fear Beijing would use the law to go after its opponents.