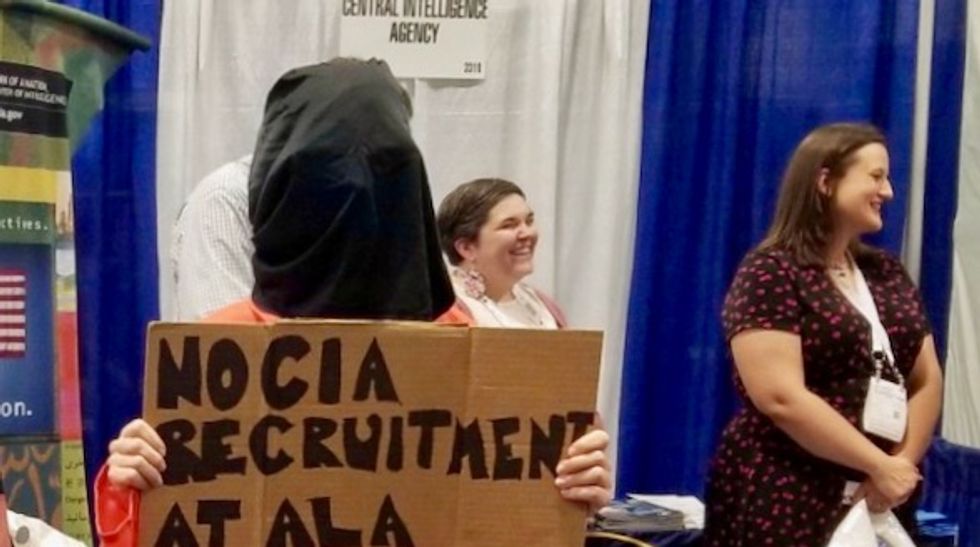 A protester holds a sign in front of the CIA's exhibitor booth at the American Library Association's 2019 annual conference. (Photo: Callan Bignoli)

"Everything they stand for is a violation of the values of librarianship, so we protested."

A group of librarians demanded the American Library Association abide by its values on Friday as they staged a protest of the CIA's presence and recruitment at the professional organization's annual conference.

At the convention, which is taking place June 20-25 in Washington, D.C., the CIA is among the hundreds of exhibitors.

Being an exhibitor at one of its gatherings, the American Library Association (ALA) says, "provides the best and most comprehensive opportunity to reach decision makers in the library field."

The protesters say the CIA's track record provides ample evidence it should not be provided that opportunity.

"The CIA is recruiting at #alaac19," said organizer and Library Freedom Project founder Alison Macrina on Twitter. "Everything they stand for is a violation of the values of librarianship, so we protested."

The protesters laid out their motivation in a statement they handed out at the action. According tothe Library Journal, the statement said, in part:

The CIA has participated for decades in the violent overthrow of governments while propping up dictators all over the world. The CIA believes in absolute secrecy for itself, but total surveillance for all others. The CIA makes use of ultra-secretive 'black sites' to conduct torture and extrajudicial detention. We need not list their entire history to show that library workers should not be associated with them, that the CIA's actions are incompatible with the values of librarianship.

"In an era where democracy is in jeopardy, where the government and its agencies are under the control of a dangerous white supremacist regime," the statement added, "library workers must take a stand against undemocratic forces — particularly those as powerful as the CIA."

That language builds on and mirrors a call from an open letter released last year.

Authored by Macrina and Dustin Fife and entitled "No Legitimization Through Association: the CIA should not be exhibiting at ALA," the letter was published right after the ALA's 2018 annual conference, when the CIA was also an exhibitor.

"We refuse to lend credence to the CIA through association and we ask our fellow library workers to join us," it said. "We should not allow them space to recruit library workers to become intelligence analysts, which was the focus of their booth."

"Library workers are powerful," the statement added. "We have a strong reputation in our local communities and across the world as being steadfast stewards of democracy, intellectual freedom, equity, and social justice. We attempt to honor these values through our collections, programs, and services and we recognize that our libraries need continuous examination in a systemically unjust society. Those values should extend to all that we do. A more democratic world is possible, and we believe that library workers can be at the forefront of this charge."

At this year's event, during a Saturday membership meeting, a resolution calling for a ban on CIA recruitment at all ALA conferences and meetings failed over objections that the CIA's free speech would be violated.

The conference, Macrina told Common Dreams, "is a ticketed, private space. We abide by a code of conduct there. It is absolutely reasonable for us to decide who gets to be in such a space. If the KKK wanted to exhibit, I believe we'd reject them. This is not a First Amendment issue."

More library workers will continue to speak out against injustice on Monday evening outside the White House, this time with their ire directed at the Trump administration's immigration policies.

"With so many librarians in our nation’s capital during a time of acute crisis in which crimes against humanity are being committed by our government, we feel it is a moral imperative to speak out while we are here" in Washington, D.C the call-to-action from Librarians for Immigrant Rights says.

"Libraries are founded upon the values of free and open access to information and to public spaces where people can safely exist free from harassment or discrimination... We therefore strongly condemn the immigration policy of President Donald Trump that has persecuted immigrants and currently operates a series of prison camps along the border where migrants are being held in deplorably inhumane conditions."

Those detention facilities, they say, are "in direct conflict with our values and mission as librarians."

What you're doing now is what would you have done if you lived in Nazi Germany or during slavery in US or at any ot… https://t.co/MmIYFtTGip
— Σταυρούλα Χ (@Σταυρούλα Χ) 1561297318.0

Urging people to attend the 5pm protest, Librarians for Immigrant Rights wrote on Facebook Sunday: "If you ever wondered what you would have done as someone living in Nazi Germany or during the US Civil Rights movement or at any other time in history, let me tell you HISTORY IS NOW. What are you going to do? If you are a librarian attending ALA in our nation's capital right now, I'd say a good start would be attending this protest tomorrow."