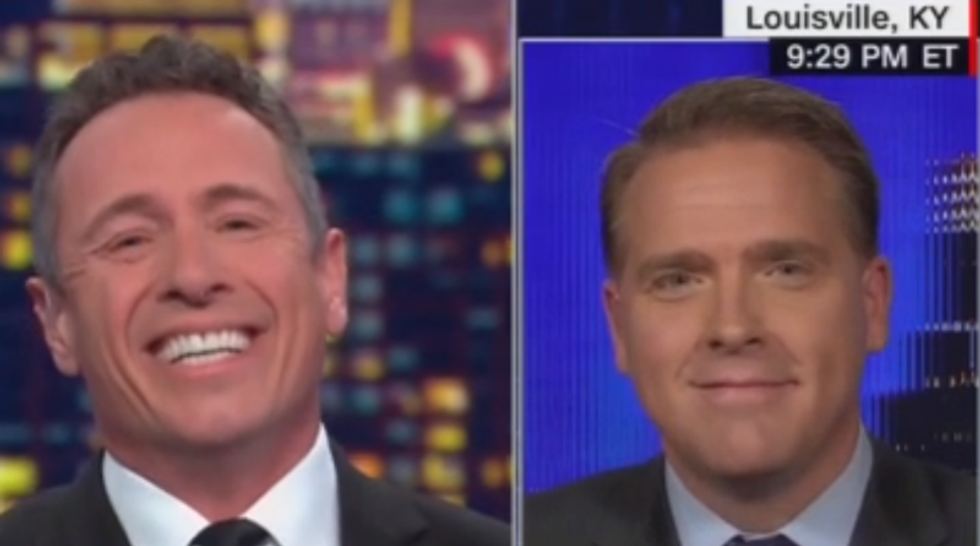 "I don't want to get too in the weeds for people especially this far out," said Cuomo. "But the word of one of the reasons that there's some resonance and relevance of the internal polls that the president lied to the American people about in terms of what they say is his lying, Scott, that it's a problem. It's a problem for him across the country. It makes people wonder whether or not they can count on his word. When you see a scenario like this one, don't believe the polls, they were your own polls, Scott, from inside the campaign. How damaging is that to this president?"

"Well," said Jennings, who served as an adviser to President George W. Bush and Senate Majority Leader Mitch McConnell. "I think most people would expect any campaign to put on a show of confidence that hey, don't worry about the polling, we're running a strong campaign, we have money in the bank—"

"He said they were incorrect. He said it was fake news," Cuomo corrected him. "He didn't say I'll be better than my poll numbers. He said we were lying about it. He was lying about it."

"Yeah, look, if I were the president, I would say it's going to be an exceedingly close election, the polls are going to show us down, the polls may show us up but don't listen to any of it because it's an exceedingly close race," said Jennings. "The correct line is, don't focus on it. Just focus on the fact that it's close, every vote matters and it's going to matter in about—"

"But it's not about what's correct," insisted Cuomo. "This is one of those moments that I know always is a challenge for you when you have to come on. I'm not talking about the president. I'm talking about you, Scott, and Republicans like you. What will be the lie that is too much for you? He lied about his internal polling data. He then fires the pollsters because he thinks they leaked ... The data comes out. He was lying about it. When will it be too much for you guys? Because any one of these, if you flipped his name, I'll put a D next to him instead of an R, you'd go crazy about any of these lies. When will it be too much for you?"

"No, just to call out the lie!" Cuomo exclaimed. "No internal baseball. This is lying. When will you say, I'm a conservative, character counts? I've been saying this my whole adult life, I'm not going to stop saying this now. He's got to stop lying. When?"

"Yeah, look," said Jennings uncomfortably, "I believe in most cases it would be better to tell the truth than anything else. There's no reason to lie about polling here."

When Donald Trump ran for the Republican Party's presidential nomination in 2016, many top Republicans shunned him. Senator Mitch McConnell (R-KY) confidently explained how Trump was "not going to change the platform of the Republican Party, the views of the Republican Party… we're much more likely to change him." He even admitted, "it's pretty obvious he doesn't know a lot about the issues." McConnell alluded to Trump's racism in vague terms, saying, "I object to a whole series of things that he's said—vehemently object to them. I think all of that needs to stop… these attacks on various ethnic groups in the country."

But as soon as Trump won the Electoral College and was declared the winner of the 2016 race, McConnell set to work to ensure he could make full use of the newly elected president regardless of Trump's continued spouting off of dangerous lies and hateful claims. The Senate majority leader was happy to see the seating of ultra-conservative Supreme Court justices Neil Gorsuch, Brett Kavanaugh, and most recently Amy Coney Barrett. He went on an unprecedented spree to remake the federal judiciary into one that is dominated by white conservative men, young enough to reshape legal decisions for a generation. He pushed through a massive tax reform bill that disproportionately benefits the wealthy, allowing almost no room for debate over it. He ensured the Senate turned into a "legislative graveyard," refusing to even consider hundreds of bills passed by the House of Representatives, thereby ensuring that most policy changes during the past four years were shaped by the president's executive action.