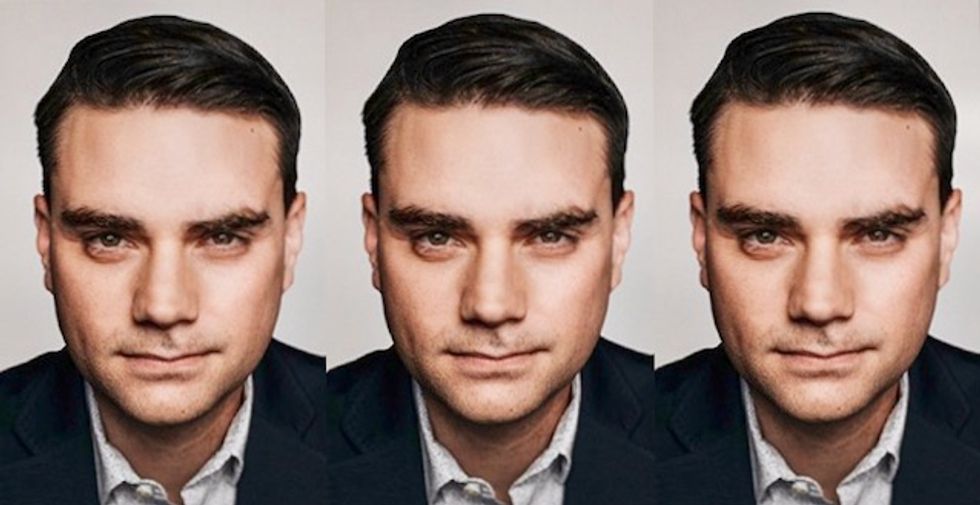 Right wing "thought leader" Ben Shapiro appeared today to say not using the "N" word is nearly impossible as he defended conservative, pro-gun teen Kyle Kashuv, one of the Parkland survivors who just had his acceptance to Harvard rescinded over his racist remarks, which included repeated use of the "N" word.

To be clear, Shapiro denies that's what he meant.

Here is Shapiro on Twitter, in what many took as him appearing to call not using the "N" word – in Kashuv's case, repeatedly, over and over and over again, "an insane, cruel standard no one can possibly meet."

So, what's this all about?

Kyle Kashuv was exposed for engaging in racist behavior, as he admits, when he was 16.

Esquire detailed Kashuv's remarks, which are not disputed, and for which he has apologized.

"After writing the [N] word 11 times in a row in a midterm study guide Google Doc shared amongst students, Kashuv joked that he was 'really good at typing' the slur because 'practice uhhhhhh makes perfect.' In the same doc, he also wrote 'Kill all the FUCKING JEWS. FUCK THE JEWS.' Texts also emerged in which Kashuv rated a female classmate '7/10,' noting that she 'goes for n****rjocks.' He posted a public apology for his remarks remarks last month, but Harvard still decided to rescind his admission two weeks ago. And despite the truly horrible comments from Kashuv, the usual suspects are, of course, appalled that he’s facing any repercussion."

Take a look at one of the examples, posted today by HuffPost's Andy Campbell (caution: trigger warning), along with how some conservatives today are reacting:

The Atlantic notes this is not Harvard's first time rescinding an acceptance.

"In 2017, Harvard rescinded admissions offers to 10 students who were members of a meme group on Facebook and shared messages that were often anti-Semitic and sexist."

After several notables on social media blasted Shapiro for appearing to say not using the "N" word is "an insane, cruel standard no one can possibly meet," Shapiro lashed out, calling them "garbage" people, which, apparently, is OK.

Take a look at a few of his attacks:

You are an extremely dishonest hack. That is not the standard I called insane and cruel. The standard that if we un… https://t.co/tDpPAVAbNU
— Ben Shapiro (@Ben Shapiro)1560787738.0