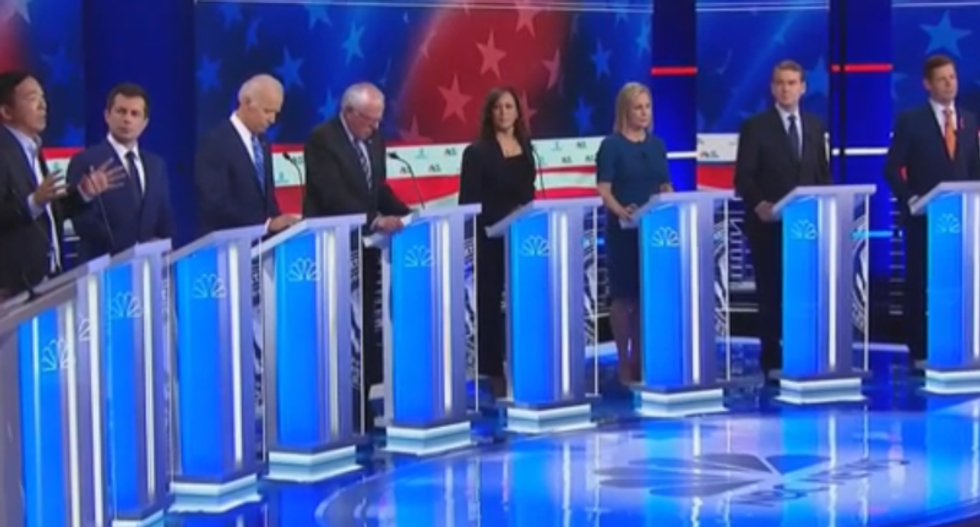 On Thursday, Democrats met for the second presidential debate in Miami. And one thing that distinguished the second round from the first is that interspersed with the policy discussion, the candidates spent a lot more time, out of the gate, attacking President Donald Trump.

"Donald Trump thinks Wall Street built America," said former Vice President Joe Biden. "Ordinary middle-class Americans built America. My dad had an expression. "Joe, a job is about a lot more than a paycheck. It's about dignity and respect and looking your kid in the eye and saying that everything is going to be okay." Too many people at the middle class and fall had the bottom fall out."

"Look, Donald Trump put us in a horrible situation," Biden concluded. "We do have enormous income inequality. The one thing I agree on is we can make massive cuts in the $1.6 billion in tax loopholes, and I would be going about eliminating Donald Trump's tax cut for the wealthy."

Sen. Kamala Harris (D-CA) agreed, using a rebuke of Trump to delve in to her tax proposals.

"Where was that question [of how to pay] when the Republicans and Donald Trump passed a tax bill that benefits the top 1 percent?" said Harris. "Working families need support and need to be lifted up and frankly, this economy is not working for working people. For too long, the rules have been written in the favor of the people who have the most and not in favor of the people who work the most. That's why I am proposing that we change the tax code so for every family making less than $100,000 a year, they will receive a tax credit they can receive up to $500 a month that makes all the difference between the families getting through the end of the month with dignity or support or not. On day one, I will repeal the tax bill that benefits the top 1 percent and the corporations of America."

Sen. Bernie Sanders (I-VT) seemed already to be relishing the opportunity to go after Trump as well.

"The polls have us 10 points ahead of Donald Trump, because the American people understand that Trump is a phony," said Sanders. "Trump is a pathological liar and a racist and that he lied to the American people during his campaign. He said he was going to stand up for working families. Well, President Trump, you are not standing up for working families when you try to throw 32 million people off their health care that they have and that 83 percent of your tax benefits go to the top 1 percent. That's how we beat Trump. We expose him for the fraud that he is."