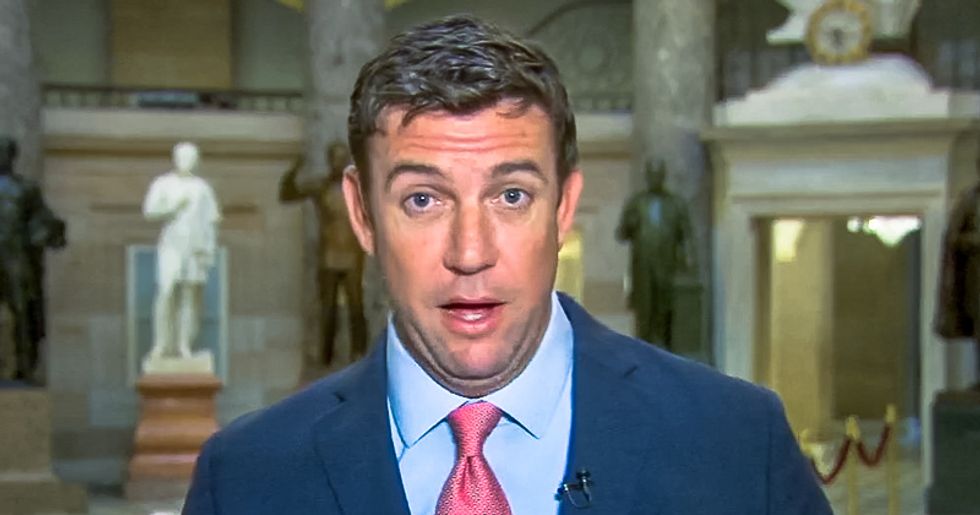 Rep. Duncan Hunter (R-CA) may be in serious trouble if his wife's guilty plea is any indication.

"Last Week Tonight" host John Oliver began his Sunday show with a short segment about Hunter throwing his wife under the bus during an interview. Now, however, his wife is pleading guilty. It made Oliver chuckle because a guilty plea typically means the defendant is cooperating with prosecutors.

RollCall cited the plea agreement, which instructs Mrs. Hunter to "make a good faith effort to provide substantial assistance to the United States in the investigation and prosecution of others."

A piece by The San Diego Union-Tribune about Margaret Hunter, speculated that her plea deal will erode "spousal privilege." The couple was charged with 60 criminal counts saying they allegedly used more than $250,000 in political contributions for their own family fun. Mrs. Hunter has only pleaded guilty to one count.

The congressman claimed in a statement that he is being targeted by Hillary Clinton, who does not work for anyone affiliated with his case.

"It was politically motivated at the beginning; it remains politically-motivated now," the statement claimed.

"[The plea deal] is not good news for Duncan Hunter," said former federal prosecutor Laurie Levenson. "I suspect she will be very helpful."

"The only wildcard is, when she testifies, how much of the dirty work will she point the finger at him for? And to what extent will she implicate herself and fall on the sword?" Levenson said.

Hunter's lawyers are citing the U.S. Constitution's "Speech or Debate" clause as a means of protecting him.

The clause says that "for any Speech or Debate in either House," members of Congress "shall not be questioned in any other Place." The intention, according to RollCall, was to keep a balance of powers between all three branches of government.

At least nine other lawmakers accused of criminal offenses from bribery to corruption and money laundering. Rep. Chris Collins (R-NY) is similarly trying to use the "Speech or Debate" clause to protect himself from disclosing documents.

Read the full report from RollCall and The San Diego Union-Tribune. And you can watch John Oliver's take here.