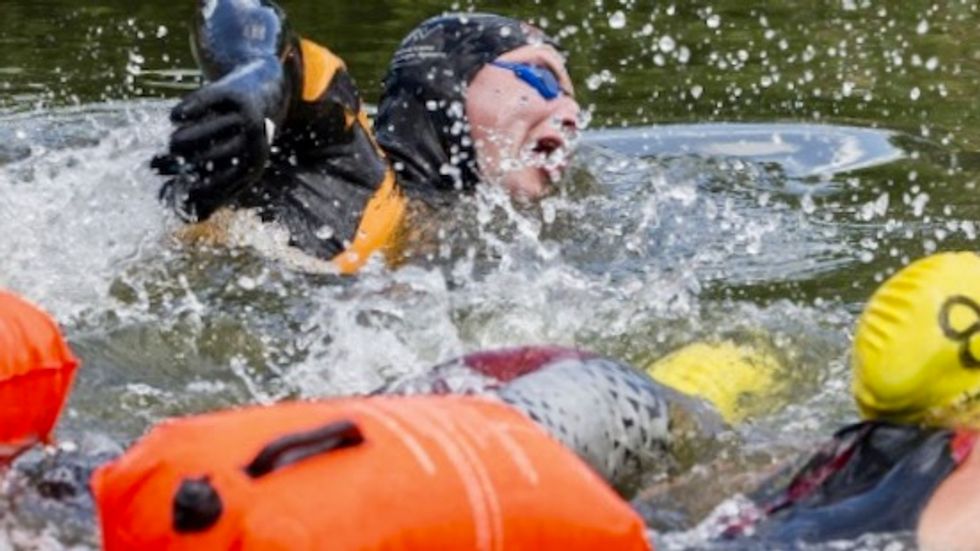 As Europe braces for a heatwave this week, a Dutchman is swimming the route of the country's most famed ice skating race -- which has not been held for two decades as climate change bites.

Instead of skating the 195 kilometres of the daunting "Elfstedentocht" (Eleven cities race), Olympic gold marathon swimmer Maarten van der Weijden is ploughing his way through its murky canals.

Van der Weijden passed the 172-kilometre (106 miles) mark of the course that criss-crosses northern Friesland province on Monday morning after embarking on the epic attempt on Friday afternoon.

"I love swimming, helping others and setting goals for myself," the 38-year-old told the Christian-based broadcaster EO in a recent interview.

Van der Weijden is a cancer survivor who overcame leukaemia to win a gold medal in the 2008 Summer Olympics in Beijing in the 10-kilometre open water race.

His epic attempt is in aid of cancer research.

It is Van der Weijden's second bid to complete the route after failing last year. He is expected back in the Frisian capital Leeuwarden by Monday evening, a livestream broadcast by the public broadcaster NOS said.

The swimmer is following the same route as the Elfstedentocht, one of the Netherlands' most beloved traditions which is now enduring a record-equalling drought.

The previous edition was in 1997, the last time the ice was thick enough to support both skaters and the hundreds of thousands of spectators that the event normally attracts.

With meteorologists predicting ever-warmer weather due to global warming, it was uncertain when another Elfstedentocht will be held again on ice.

In the meantime, Van der Weijden's alternative marathon along the course has captured the country's imagination.

Dutch Prime Minister Mark Rutte tweeted that the swimmer was "on course for an incredible performance", adding: "The whole of the Netherlands is swimming with you!".

Completing the skating race is seen as a major achievement and so important that soldiers are allowed to wear its medal, called the "Elfstedenkruisje" (Eleven cities cross), on their military uniforms.

Participants qualify for the medal after collecting stamps on a card from all the 11 cities around Friesland with the start and end in Leeuwarden.

Unfortunately for Van der Weijden, he will not receive an Elfstedenkruisje at the end of his epic swim.

"Our cross is only for people who have skated the marathon. Although we applaud him, we cannot make an exception," Immie Jonkman, chairwoman of the Eleven cities marathon, told regional radio.