Four years ago this week: Trump's escalator ride and the Charleston shooting. It's not a coincidence 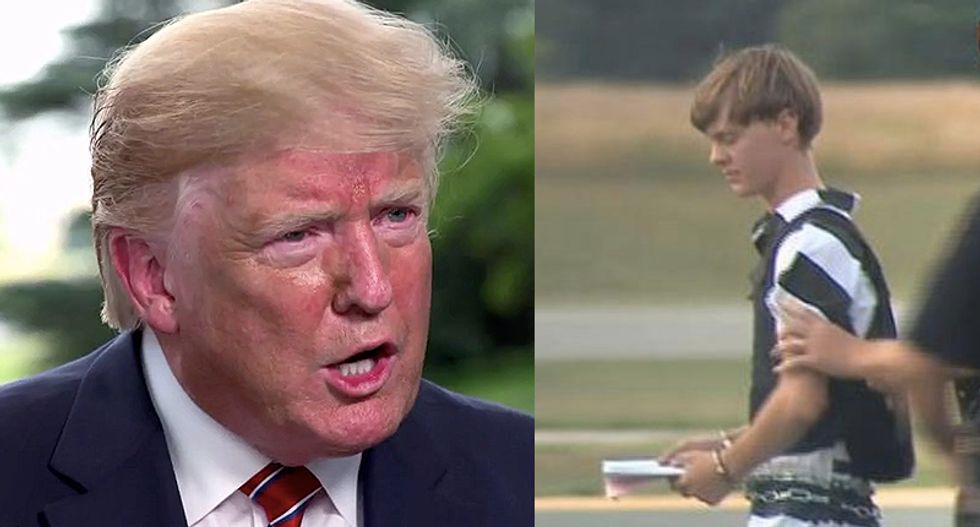 It was four years ago (plus one day) when Donald Trump descended his golden elevator at Trump Tower and announced to the world that he was running for president to make America great again. It was a memorable day, although I don't think anyone believed at the time it would be more than a bizarre blip in presidential campaign history.

It was a patented Trumpian spectacle, ridiculous and over the top. Needless to say, the speech itself was offensive and absurd. He called Mexicans rapists and criminals, bragged about his allegedly enormous wealth and said that the U.S. had never beaten China and Japan at anything. He lied about the crowd size and insulted the press. In other words, it was the template for all the speeches that were to come, throughout his campaign and his presidency.

The immediate reaction among the media was incredulity mixed with smug condescension. Most apparently assumed this was one of those laughable gadfly campaigns, like former Sen. Mike Gravel's 2008 Democratic run, or the 2012 bid by Republican businessman and flat-tax fan Herman Cain. After all, Trump had feinted toward running for years, even launching a short-lived bid for the Reform Party nomination in 2000. And the GOP primary of 2016 was already proving to be one for the books. On the day Trump announced for president, the man leading in the polls was Dr. Ben Carson, a political neophyte who had recently declared that the United States is "very much like Nazi Germany."

I wrote about the announcement for Salon and I saw it a bit differently than most. To me, this mixture of Tea Party right-winger and wealthy showbiz celebrity seemed like a potentially potent combination. He had enough money to self-finance, which meant he could stay in for the long haul. I looked up the numbers for his TV show and found that he had reached millions more people with his various iterations of "The Apprentice" than Fox News could ever dream of. He had the potential to reach a far bigger audience as a right-wing blowhard than most professional politicians.

While Trump's guy-at-the-end-of-the-bar style was flamboyant, nothing he said was anything that a person who watched Fox News or listened to Rush Limbaugh wouldn't nod along with in agreement. In fact, the headline for my piece was "We must take Donald Trump seriously: Yes, he's a right-wing blowhard. But he's rich & famous, and his kooky ideas fit snugly in the Tea Party mainstream."

But there was something much darker happening that I didn't see coming. That piece didn't run as planned on the day after the Trump Tower announcement. It ran the following Saturday. That's because on the evening after Trump's announcement a 21-year-old white supremacist named Dylann Roof went into a prayer meeting at the Emanuel African Methodist Episcopal Church in Charleston, South Carolina, and murdered nine African American church members, injuring three more. He confessed that he was hoping to start a race war.

That tragedy necessarily meant that any snarky pieces about Donald Trump were suddenly inappropriate. But looking back on it four years later, those two events were psychically connected.

Roof was not motivated by anything Donald Trump said in his announcement speech, of course. He probably didn't even know about it. According to the FBI, he was "self-radicalized" on the internet and through contacts with other white supremacists. The manifesto he posted on a website called "The Last Rhodesian" featured derogatory opinions about African Americans, Jews, Hispanics and others, and featured pictures of him posing with the Confederate flag. He explained that the 2012 shooting of Florida teenager Trayvon Martin made him "racially aware" because Martin's killer, George Zimmerman, had been right to shoot him.

But there are threads of similar ugly thought processes at work in these two events that took place within a day of each other. When Roof began to open fire on those people at the prayer meeting he reportedly said, "I have to do it. You rape our women and you're taking over our country. And you have to go."

One day earlier on a stage in his golden Manhattan tower, Donald Trump announced his campaign for the presidency by saying, "When Mexico sends its people, they're not sending their best. They're sending people that have lots of problems, and they're bringing those problems with us. They're bringing drugs. They're bringing crime. They're rapists. And some, I assume, are good people ..."

These racist ideas have been with us a long time, and America's history is full of the violent horrors that result from them. Neither Trump or Roof said or did anything that hasn't been said or done before. Indeed, Trump himself had quite a history of racist activities, from the disgraceful rhetoric in the Central Park Five case to his "birther" crusade against Barack Obama.

But looking back, it feels as if something shifted in that 48-hour period four years ago this week. A rock was overturned and something truly grotesque crawled out, something that hadn't seen the light of day for quite a while. Since Trump announced his candidacy, white supremacist violence has surged. That's not limited to the U.S., although when it comes to racist violence, Trump has succeeded in making America No. 1. The president's shameful reaction to the racist violence in Charlottesville, and his inflammatory rhetoric about the border — which clearly inspired the massacre of Jewish worshipers at the Tree of Life Synagogue in Pittsburgh — are just two incidents among many that illustrate how the white supremacist movement has taken on new life in the last four years, drawing strength and motivation from the leader of the most powerful nation on earth.

When a man gunned down 51 people in a pair of mosque attacks in Christchurch, New Zealand, this March, he too left a manifesto. In it, he claimed he supported Trump “as a symbol of renewed white identity.” When asked if he thought white nationalism was a problem, Trump responded, “I don't really."

The president is holding a big rally on Tuesday in Orlando to announce that he's running for re-election. I don't think anyone will be surprised if he says the same things he said four years ago. He's been repeating them almost daily ever since then. People still laugh and roll their eyes, just as they did back in 2015. But now we've seen the results of his rhetoric, and we know how he reacts when those results inevitably turns violent. It's not a joke. It never was.