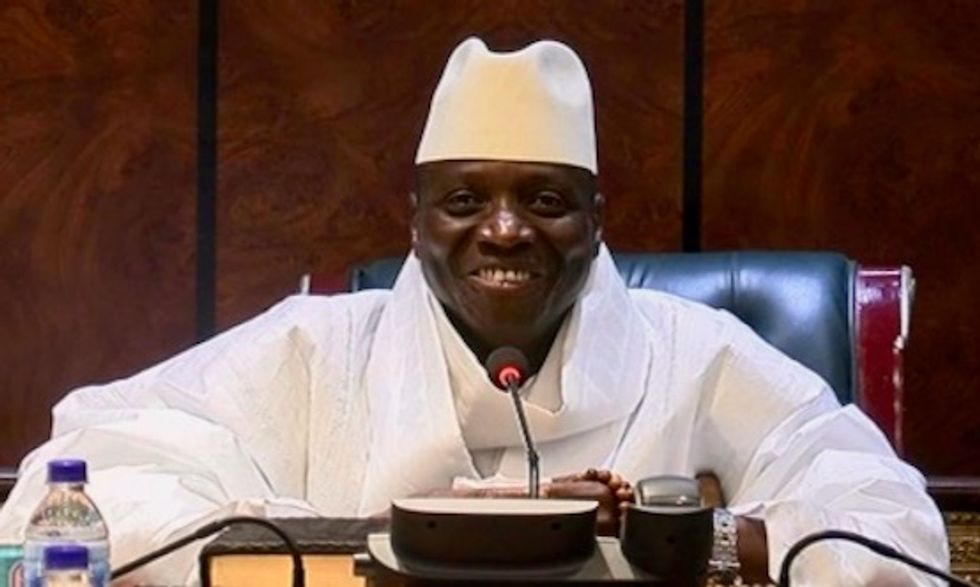 Yahya Jammeh, pictured in the twilight of his reign, shortly after the December 2016 elections GRTS - Gambia Radio and Television Services/AFP

"But rape and sexual assault are crimes, and Jammeh is not above the law, and no woman is beneath it."

His regime was notorious for its brutality and corruption, but this is the first time that his sexual abuse of women has been extensively and publicly documented.

The investigation, by HRW and a Swiss NGO, TRIAL international, is based on evidence from several women, eight former Gambian officials and several other witnesses, they said.

Jammeh had "protocol girls" who were required to be on call to provide him with sex, according to their report, issued in Dakar, the capital of neighbouring Senegal.

He "handpicked young women to satisfy his sexual fantasies," according to a top aide quoted in the report.

As an inducement, he would lavish gifts on them or provide support for their impoverished families or offer a scholarship to study abroad.

They were required to live next to his residence and were barred from leaving without his authorisation -- and if they refused his sexual demands, he would threaten them or hit them.

The "protocol girls" were overseen by his female cousin, Jimbee Jammeh, who also procured other women for him, the report said. She fled with him to Equatorial Guinea.

Several women have gone on record with their experiences, it said.

One of them was Toufah Jallow, then an 18-year-old drama student, who was the 2014 winner of the main state-sponsored beauty pageant, which Jammeh had lauded as "a means to empower girls".

Over six months, she refused his advances, rejected his offer to become a "protocol girl" and a proposal to marry him, Jallow said.

After aides brought her to attend a pre-Ramadan Koran recital at the presidency, State House, Yahya locked her in a room, hit and threatened her, injected her with a liquid and raped her, according to her testimony.

She fled to Senegal days later.

"These admirable women broke the culture of silence. It is now crucial that the TRRC and the government give them a path to redress and justice," said Marion Volkmann-Brandau, who led the research.

"It's time for the 'shame' of rape to switch sides."

Jammeh is also accused of spiriting away hundreds of millions of dollars -- one estimate put it as high as one billion dollars (880 million euros).