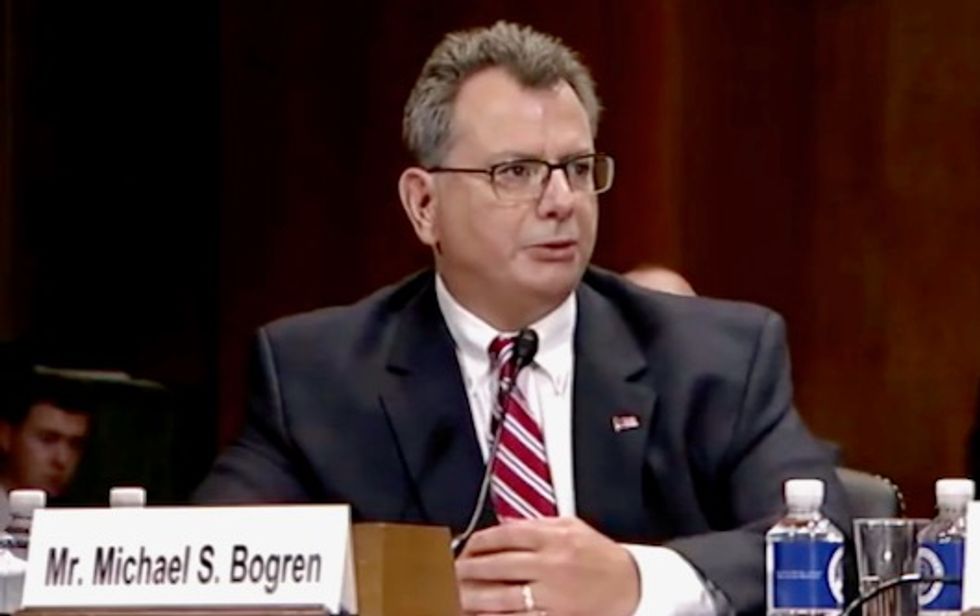 Prominent Michigan attorney Michael Bogren on Tuesday withdrew his nomination to become a District Judge on the U.S. District Court for the Western District of Michigan after being attacked by several Republican Senators who accused him of anti-religious bigotry and suggested he did not hate gay people enough.

Those U.S. Senators were pushed in to action after an anti-gay hate group, the Family Research Council, along with two far right organizations, the Catholic League and the Judicial Crisis Network, urged President Donald Trump to pull Bogren's nomination.

It is a rare blow for President Trump, who has – thanks to Senate Majority Leader Mitch McConnell – been able to pack the federal bench with more judges, and especially more far right wing extremists, than any president in modern history.

In 2017 the City of East Lansing, Michigan, banned a farmer from selling his goods at a local farmers' market after he announced he would not allow same-sex couples to marry on his farm, which also serves as a wedding venue. The farmer cited his Catholic faith as his reason.

Michael Bogren was the attorney for the City of East Lansing, and in that capacity wrote in a legal brief that "there can be no constitutionally sound argument that sincerely held religious beliefs would permit a secular business to avoid the prohibitions against racial discrimination or gender discrimination found in federal, state and local laws."

He is correct, legally and morally.

Which is why the religious right waged war against his nomination.

Bogren, as The Detroit News explains, "offered an example of how a Ku Klux Klan member opposed [to] interracial marriage 'who ran a business similar to the plaintiffs’ business would not be able to invoke' the First Amendment to avoid anti-discrimination statutes that apply to public accommodations if interracial couples were refused service."

U.S. Senator Josh Hawley – a grenade-throwing Republican who coincidentally supports special rights for Christians to not have to serve or otherwise do business with same-sex couples – led the charge. He was joined by Texas Republican Sen. Ted Cruz – who once accused gay people of waging "jihad" against Christians, and has very publicly supported special rights to discriminate for Christians.

During the confirmation hearing, Hawley berated Bogren, accused him of not supporting the First Amendment, and wrongly used the Supreme Court's Masterpiece Cake Shop case as a cudgel against the nominee.

Now, it's also important to note that we actually have no idea what Bogren's personal beliefs are, because, as he explained, his job was to represent his client.

But to make the story even more absurd, Bogren's cousin is an opinion writer at the far right wing website The Federalist. She has been advocating for him, even penning a column titled, "No, Judicial Nominee Mike Bogren Is Not An Anti-Religious Bigot."

In it, she admits if she did not personally know her cousin she too "would likewise have shared concerns that [his] zealous representation of the City of East Lansing, as his briefing demonstrated, might mean the attorney making those arguments held a disregard for people of faith."

All of this is to point out that the religious right, enabled and empowered by President Trump, is turning America into a nation that places it unique, extreme religious beliefs over the law, and is carving out special rights for far right Christian extremists.

In fact, "Far Right Christian Extremists Only" is the sign they would like to see at the borders of the United States.

If you have any doubt that the Christian right is trying to use its powers to turn America in to Gilead from "The Handmaid's Tale," take a look at these stories just from the past few days: