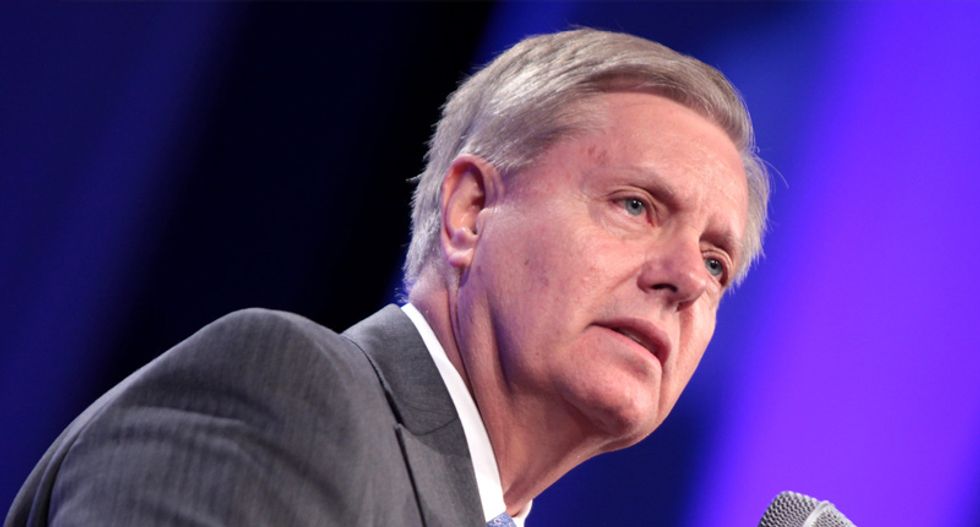 Once again, President Donald Trump has been accused of a sexual assault — one of the most severe charges yet, in fact — and yet the Republican Party continues to make clear that it will not take these allegations seriously.

Journalist E. Jean Carroll detailed her account of Trump raping her in a Bergdorf Goodman dressing room more than two decades ago in an article, in her new book, and in TV interviews. New York Magazine reported that it contacted two of her friends who confirmed that she told them about the assault shortly after it happened.

But Carroll is only one of the more than a dozen women who have accused Trump of sexual misconduct, and most Republicans seem intent on ignoring every last one of them.

CNN”s Manu Raju, for instance, reported that when House Minority Leader Kevin McCarthy was pressed Tuesday on the allegations and the fact that Trump responded by saying Carroll is not his “type,” he buried his head in the sand.

“I don’t, I didn’t, I haven’t seen that,” McCarthy said. “I haven’t read that. I know the president has said this is not true. I haven’t, know anything else about it.”

Kristin Wilson Keppler of CNN saw Ivanka Trump, the president’s daughter and aide, at the Senate Republican lunch on Tuesday. Keppler asked her if she had a reaction to the new allegation, and Ivanka didn’t respond. Keppler followed up by asking “Should women be believed?” Again, Ivanka ignored the question.

HuffPost reporter Igor Bobic was one of the more aggressive reporters searching for Republican lawmakers’ reactions to the development. Predictably, they largely avoided commenting or saying anything substantive. At least one even implied that Carroll might have a motivation to make the story up:

Sen. Mitt Romney (R-UT) was one of the exceptions to this shameful pattern. Bobic reported that he said the accusation is “very serious nature and it deserves to be considered and evaluated.” However, it seems unlikely Romney will actually pursue any concrete steps to hold Trump accountable or uncover the truth of the allegation. When pushed about Trump’s comment on Carroll not being his “type,” Romney subtly sent the message to the president that this wasn’t the right response.

“The president indicated that this did not occur and that’s, I think, his strongest point to make,” Romney told Bobic.

Sen. Susan Collins (R-ME) perhaps had the sharpest remark about Trump, as Politico’s Burgess Everett reported, She said of the president’s “type” comment: “I thought that was extremely bizarre.”

There are many reasons Republicans — and everyone else — should take the allegation seriously. Carroll’s account is compelling on its own, and it’s reportedly been corroborated by two of her friends. It also comes in a series of similar allegations from other women about Trump, the sheer number of which should make them almost impossible to deny. Trump has also already damaged his credibility in denying the allegations by saying falsely, in contradiction of photographic evidence, that he had never met Carroll. He also threatened Carroll, saying, “people should pay dearly for such false accusations,” which should be completely unacceptable. And finally, perhaps most damning of all, Trump himself admitted to exactly the kind of aggressive sexual assault he’s been accused of in the infamous “Access Hollywood” tape.

Of course, several of these facts have long been known, and yet the Republican Party has continued to support Trump anyway. GOP lawmakers probably assume that there’s no going back now. But this, too, is a mistake; it’s never too late to show courage.