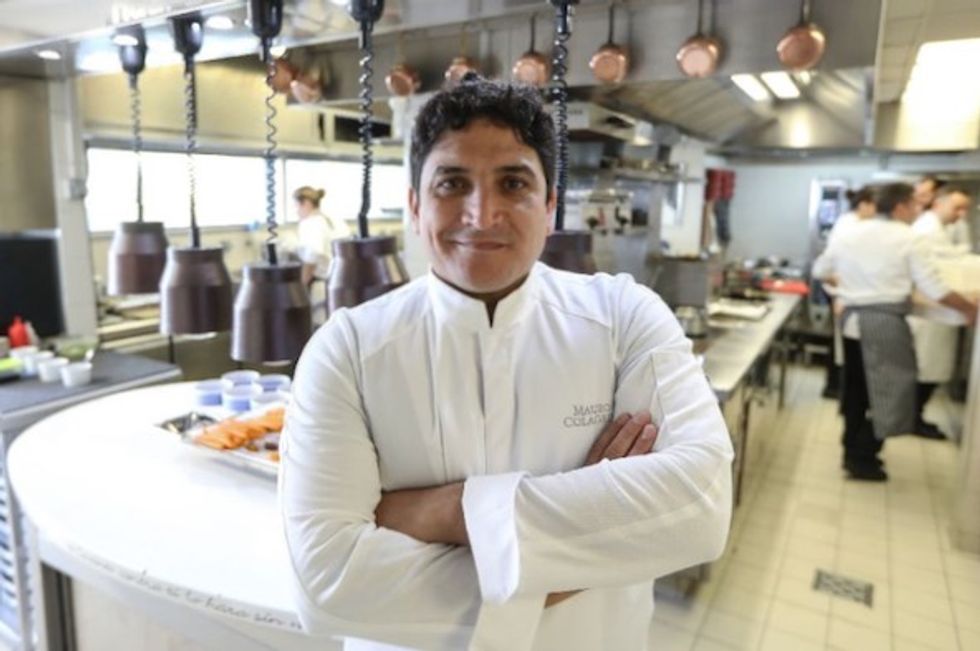 France's Mirazur restaurant -- whose Argentine chef Mauro Colagreco draws inspiration from the sea, the mountains, and his own garden -- was crowned Tuesday the world's best by an influential trade list, beating contenders from Denmark and Spain.

The accolade came just months after Colagreco was handed a third Michelin star, and was the first time a French establishment has triumphed in the World's 50 Best Restaurant list.

"I'm in the sky and I'm waiting to come back here," Colagreco said as he collected his award for his restaurant in the French Riviera town of Menton. "I don't have words to explain," he said.

In second spot in the awards -- which took place in Singapore, their first time in Asia -- was Noma in Copenhagen, and third was Asador Etxebarri in Spain.

Gaggan in Bangkok was fourth, the highest ranked Asian restaurant. Fifth was Geranium in Copenhagen, and sixth was Central in Lima, tagged as Best in South America.

The top restaurant award has gone to Spain seven times, the most of any country. Last year Italy's Osteria Francescana took the number one spot.

Mirazur took the third spot in the awards last year.

After his victory was announced, Colagreco took to the stage joined by his Brazilian wife carrying a banner representing four flags -- those of Argentina, Brazil, France and Italy.

"Thank you my team. You deserve it, all these years. Thank you friends for supporting us during these last 13 years," he said.

Colagreco is the only foreign chef to have been awarded three Michelin stars. He opened the restaurant in 2006 and was awarded his first star the following year, before getting his second in 2012.

The Argentine-born chef moved to France in 2001 and worked with Bernard Loiseau, Alain Passard and Alain Ducasse before spending a year at Le Grand Vefour.

He said that he ended up in Menton by chance.

"The owner of the place was the perfect stereotype of an Englishman on the Cote d'Azur, a white linen outfit and a Panama hat," he told AFP in a recent interview.

"He saw that I had no money but he wanted to know what an Argentine was doing in Menton... He rented me his restaurant for a ridiculous sum."

This "gave me a lot of freedom" to experiment, he said.

The early days were tough but since being awarded the second star the restaurant has seen its popularity grow.

Mirazur, located in southeast France near the Italian border, offers dishes made with ingredients from Colagreco's own backyard farm, including fresh vegetables and seafood.

Despite his growing fame, Colagreco said that he wants to "keep his feet firmly on the ground."

AFP / Theodore LIM Mirazur chef-owner Mauro Colagreco (C), flanked by his team, said he was "in the sky" after his restaurant was crowned the world's best

For their first foray into Asia, award organizers picked Singapore, which is well-known for its buzzing culinary scene.

But Europe continued to dominate with 25 restaurants named in the best 50, including seven in the top 10. Asia won seven, the United States six, and Latin America six.

The awards are organized by British magazine Restaurant, owned by William Reed Media.

They were launched in 2002 and are now as coveted as Michelin stars, although the methodology used to select the best restaurants has faced criticism, especially from several French chefs who say it remains unclear.

There are no criteria for putting a restaurant on the list, which is based on an anonymous poll of more than 1,000 chefs, restaurant owners, food critics and other industry insiders from around the world.

Each member gets 10 votes and at least four of those votes have to go to restaurants outside their region.

The event has been held before in Spain, London, New York and Melbourne.