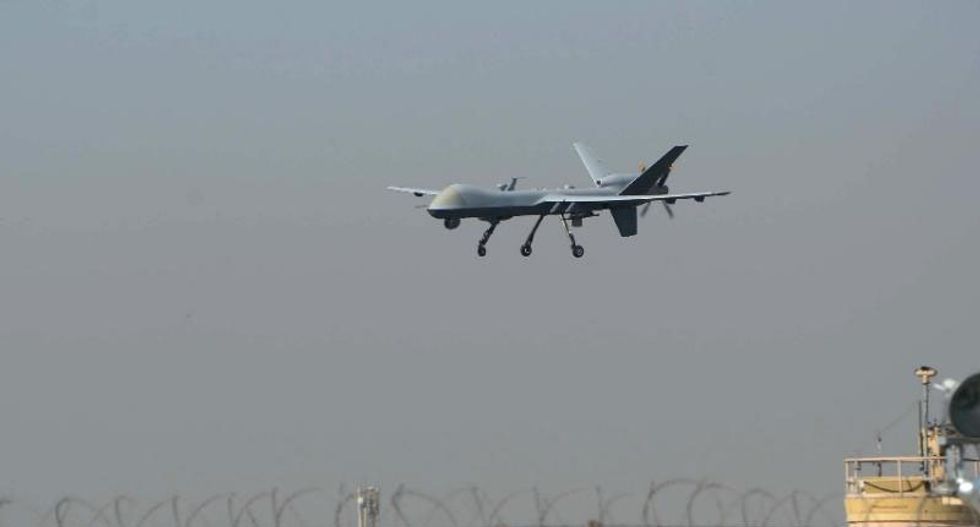 The United States on Monday was due to tighten sanctions on Iran as the two countries traded barbs in a tense standoff sparked by Washington's withdrawal from a nuclear deal.

Both nations say they want to avoid going to war, but tensions have spiralled as a series of incidents, including attacks on tankers and the shooting down of a US drone by Iran in the Gulf, raised fears of an unintended slide towards conflict.

He made the allegation in a tweet that included a map purporting to show the drone had violated Iranian airspace.

It was dismissed as "child-like" by US Secretary of State Mike Pompeo as he headed to Saudi Arabia and the United Arab Emirates for Iran talks with the two US allies.

Zarif's statement came after Iran said it had shot down a US Global Hawk drone on Thursday for violating its airspace near the strategic Strait of Hormuz, which the United States denies.

US President Donald Trump called off a planned retaliatory military strike Friday, saying the response would not have been "proportionate", as Tehran warned any attack would see Washington's interests across the Middle East go up in flames.

"Neither Iran nor any other hostile actor should mistake US prudence and discretion for weakness," Bolton said in Jerusalem.

With the strike called off, Washington secretly launched cyber-attacks against Iranian missile control systems and a spy network in response to the downed drone, according to US media reports.

US media said the attacks crippled computers used to control missile launchers and a spying group tracking ships in the Gulf.

Iran is yet to officially react to the claim, but Fars news agency called the move a "bluff" and said it was meant to repair the White House's "lost reputation" following the downing of its drone.

The downing of the US drone came after a series of attacks on tankers in the congested shipping lanes of the Gulf, which Washington has blamed on Tehran.

Riyadh has repeatedly accused Iran of supplying sophisticated weapons to the Huthis, who have launched cross-border attacks on facilities inside Saudi Arabia.

Iran has denied attacking tankers or supplying the Huthis.

Trump, who spent Saturday huddling with his advisers, said he was ready to reach out to Iran if the country agreed to renounce nuclear weapons.

Iran has denied seeking a nuclear weapon, and says its programme is for civilian purposes.

A multinational accord reached by Tehran and world powers in 2015 sought to curb Iran's nuclear ambitions in exchange for sanctions relief.

But Trump left that agreement more than a year ago and has imposed a robust slate of punitive economic sanctions designed to choke off Iranian oil sales and cripple its economy -- which he now plans to expand.

"We are putting major additional Sanctions on Iran on Monday," tweeted Trump, who has also deployed additional troops to the Middle East.

"I look forward to the day that Sanctions come off Iran, and they become a productive and prosperous nation again - The sooner the better!"

Pompeo added: "When the Iranian regime decides to forgo violence and meet our diplomacy with diplomacy, it knows how to reach us. Until then, our diplomatic isolation and economic pressure campaign against the regime will intensify."

A minister from Britain's Foreign Office was in Tehran on Sunday to meet top Iranian diplomats for "urgent de-escalation" of tensions, yet the Iranian party said the talks were "repetitive."

Minister of State for the Middle East Andrew Murrison had the "usual talking points", said Kamal Kharazi, the head of the Strategic Council of Foreign Relations at Iran's foreign ministry.

With the US out of the deal, Iran has said it would reduce some of its nuclear commitments unless the remaining partners -- Britain, China, France, Germany and Russia -- help it circumvent US sanctions and sell its oil.

A top Iranian military official warned Washington against any strikes.

"Firing one bullet towards Iran will set fire to the interests of America and its allies" in the region, armed forces general staff spokesman Brigadier General Abolfazl Shekarchi told the Tasnim news agency.

"If the enemy -- especially America and its allies in the region -- make the military mistake of shooting the powder keg on which America's interests lie, the region will be set on fire."

A former top US military adviser warned the tensions with Iran "could spin out of control".

"My biggest concern is the president is running out of room, running out of options and while rhetoric goes back and forth on how close we came to hitting Iran just the other day, that this thing could spin out of control," former chairman of the Joint Chiefs Mike Mullen told ABC's "This Week."