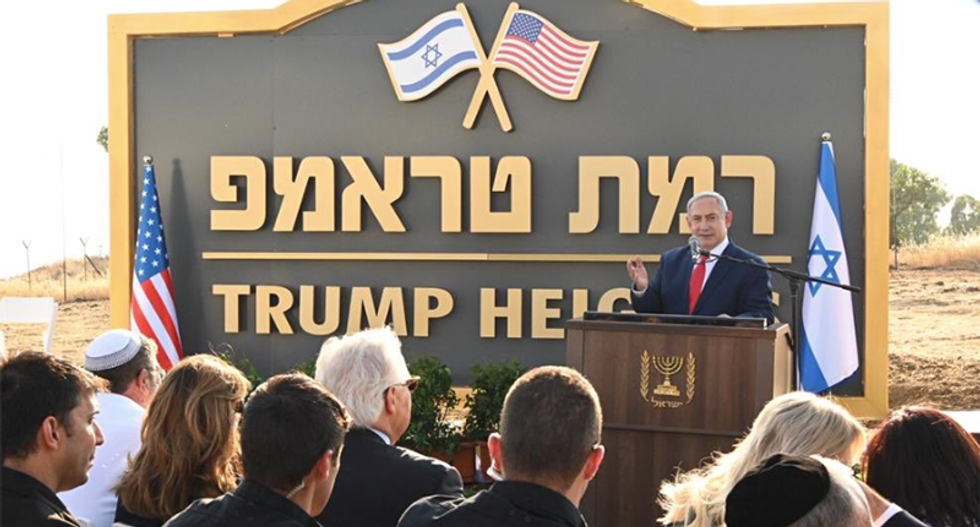 (Photo by US Ambassador to Israel, David M. Friedman/Twitter)

Standing in front of a large sign saying "Trump Heights," Netanyahu, who is being forced back into another election, announced the building before planning even began, Axios reported.

The Times of Israel headlined the stunt as having "no plans" and "no budget."

"Anyone who reads the fine print in this 'historic' decision will understand that this is nothing more than a nonbinding, fake policy," said Blue and White MK Zvi Hauser. "There is no budgeting, no planning, no location for a settlement, and there is no binding decision to implement the project. But at least they insisted on a name for the settlement."

Trump support has been tremendous for Netanyahu, Axios explained. He was supposed to build a coalition government after being elected but failed to do so by the deadline. Now he's being forced back into an electoral campaign, and the site explained he'll need Trump's help to get there.

He explained in the press conference that the building hasn't even been passed by his cabinet yet, but he said that they would pass a resolution to establish the town of Golan. Right now, the town only exists on paper.

"So what was actually decided is that the Ministry of Housing will start preliminary planning work. For now, there is not even a fund allocated to build the new town," Axios explained.

Trump tweeted: "Thank you Prime Minister Netanyahu and the state of Israel for this great honor."

It's unknown if Trump is aware that the town and tower don't exist.