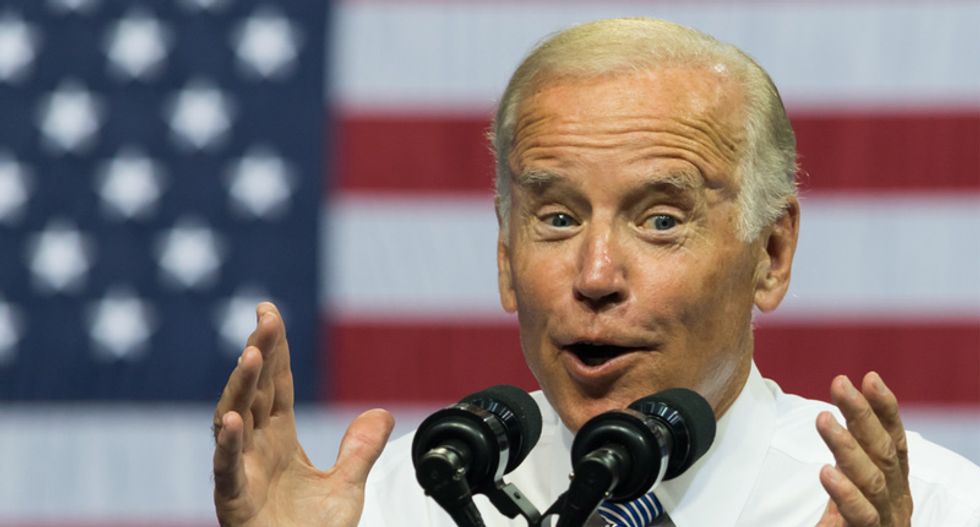 Joe Biden makes a jovial gesture while he delivers a speech at a campaign event for democratic presidential nominee Hillary Clinton in 2016. (Evan El-Amin / Shutterstock.com)

Just hours after appearing at Monday's Poor People's Campaign event in Washington, D.C. and promising to work for the less fortunate, 2020 Democratic frontrunner Joe Biden went straight to a Wall Street fundraiser in New York City where he solicited donations from, among others, a pro-Trump billionaire.

The fundraiser was held at the Manhattan penthouse apartment of investor Jim Chanos. According to CNBC reporting, Biden told wealthy attendees "you guys are great" and "you guys are incredibly important" before singing the praises of working class Americans.

Biden also "suggested" to the crowd that he had raised nearly $20 million already for his campaign, citing 360,000 donors that have contributed an average of $55, approximately $19.2 million.

At one point during the evening, CNBC reported, the former vice president asked supermarket magnate John Catsimatidis for help, but the plea didn't result in any benefit for the Democratic frontrunner. Catsimatidis told Biden he was set on Trump and, on Tuesday, tweeted that he and his family—major figures in New York Republican circles—were all in for the president.

Biden's appearance at Chanos's apartment came on the same day the former vice president took the stage in Washington to wax on his strategies to end poverty. But the former vice president's remarks concentrated mainly on his relationship with former president Barack Obama, The Washington Post reported, and his desire to work with the GOP—at one point leaning over moderator Joy Ann Reid to tell her that it was possible to "shame" Republicans into working with Democrats.

"Joy Ann, I know you're one of the ones who thinks it's naive to think we have to work together," said Biden. "The fact of the matter is, if we can't get a consensus, nothing happens except the abuse of power by the executive branch. Zero."

Biden also used his time onstage to take issue with those calling for real change rather than incrementalism.

"Folks, look, if you start off with the notion there's nothing you can do, well, might you all go home then, man?" Biden said. "Or let's start a real, physical revolution if you're talking about it."

Biden continued to attend fundraisers in New York on Tuesday, according to Newsday's Emily Ngo, though it was unclear if he courted any additional deep-pocketed Trump backers.

On CNN Thursday, fact-checker John Avlon tore into the right-wing paramilitary groups involved in the Capitol invasion, slamming their "false sense of patriotism."

"This is a clear and present danger rooted in right-wing disinformation and nationalist conspiracy theories," said Avlon. "As more indictments are issued, we're getting a clear look at what we're confronting. For example, nearly 1-in-5 of the rioters charged have military backgrounds, according to analysis last week by NPR. Including a reservist with a secret-level security clearance who is an avowed white supremacist and Nazi sympathizer, according to court documents. We've also seen members of law enforcement arrested, including cops from Virginia and Houston."

On CNN Thursday, Rep. Adam Kinzinger (R-IL) became the first Republican to call for pro-QAnon Rep. Marjorie Taylor Greene (R-GA) to be stripped of committee assignments, following reports that she called for prominent Democrats to be executed on social media and repeatedly harassed a school shooting survivor.

"Marjorie Taylor Greene, as we said ... endorsed or expressed support for the idea of executing Democratic members of Congress," said anchor John Berman. "We see her on the video with David Hogg as well. She has now a seat on the Education Committee given to her by House leadership. What do you think should happen to Marjorie Taylor Greene in Congress?"