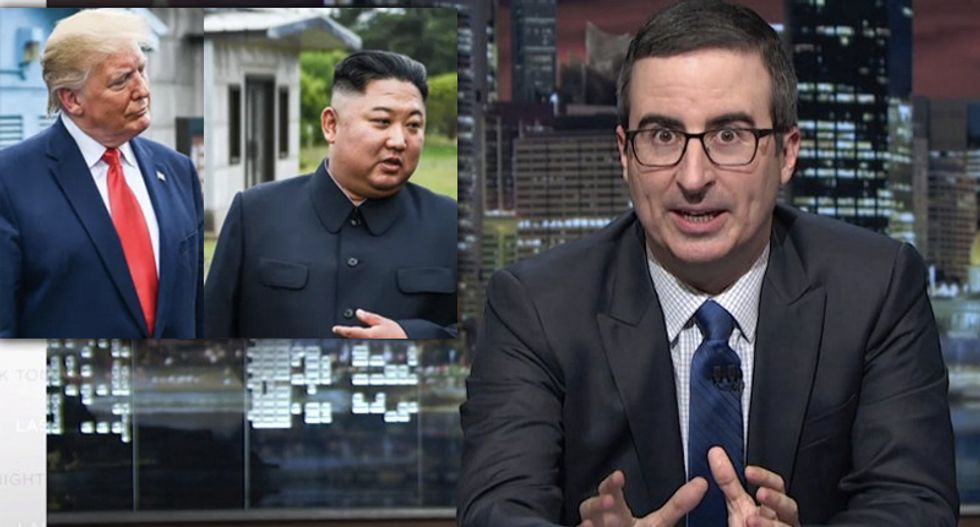 In his Sunday opener, HBO host John Oliver noted the irony of President Donald Trump waiting for consent from North Korean dictator Kim Jong Un before he crossed the line from the DMZ into the country.

"This week was a big one for Trump and diplomacy," Oliver said. "Two words that go together like fire and Chicago 1871."

Oliver noted that the week Trump spent at the G-20 was an epic disaster where the American president joked with Russian President Vladimir Putin about not hacking the elections anymore and called Saudi Crown Prince Mohammed bin Salman his "friend."

But Sunday morning, when Trump seemed "thrilled" he was invited to North Korea.

"It's just an honor to be with you," Trump told Kim, who looked on with a slight smirk. "It was an honor that you asked me to step over that line and I was proud to step over the line. I thought you might do that. I wasn't sure, but I was ready to do it, and I want to thank you, it's been great."

"Oh!" Oliver exclaimed. "That's actually nice. So, Trump wanted to step over the line. Was ready to do it. But waited until he received affirmative consent. What a refreshing change of pace for him. Maybe Trump's plan moving forward should be: treat women with the same respect you do murderous autocrats!"