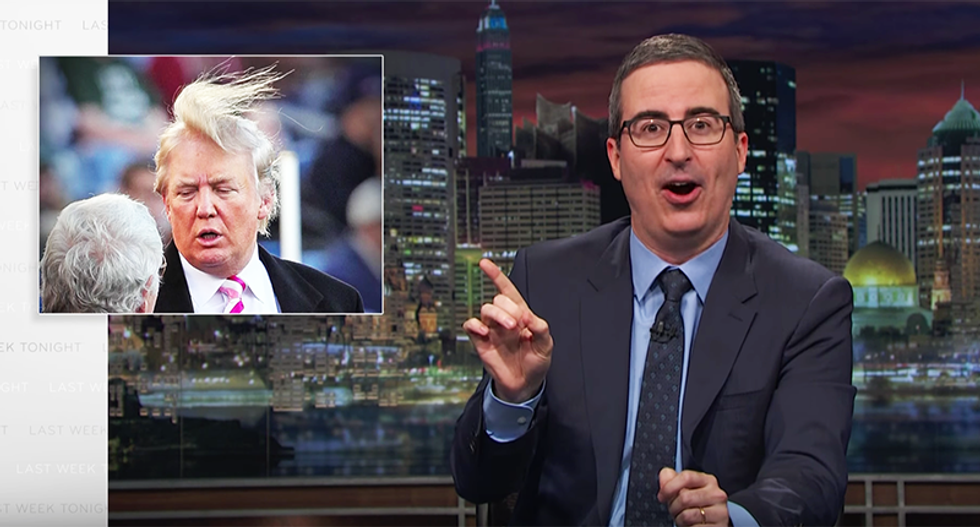 The best thing you can say about Donald Trump is that he "maybe hasn't eaten a dolphin before," John Oliver joked on his Sunday episode of "Last Week Tonight."

Oliver warned people that while Trump had a "change of heart" about Iran it was only about Iran. "He didn't have an Ebenezer Scrooge moment, threw open a window and yelled, 'I'm going to be good from now on!'" the host explained. "No, he just didn't bomb some people."

As Fox News explained, the drone that Iran shot down was not simply one from Amazon. Oliver said it wasn't like Trump said, "Alexa, send a drone to surveil Iran." According to Fox's genius analysis, those drones cost actual money.

One of the worst things, however, is watching the president take 40 seconds to walk through a process for why he decided not to go to war with Iran. Oliver couldn't help but notice that the decision-making process was strangely the same as if he would have decided to go to war.

"It's amazing to watch him do the right thing in the exact same style that he does the wrong thing," Oliver said. "Many of the same ingredients were there. Joyously quoting people calling him 'sir.' Expressing child-like disbelief that he gets to hang out with generals. Needlessly pointing out the potential dead were, in this case, Iranians. Correctly identifying what was shot down as a drone was before correcting it to the wrong answer of 'plane.' And of course, telling a lie that makes him look good. Because there was no way he wasn't told about how many potential casualties the moment the plan was presented to him."

"Normally the U.S. might coordinate with international response but our allies have been noticeably slow to come to our side," Oliver explained. "That's because they believe Trump is part of the reason that Iran is acting out in the first place. Remember, he pulled out of the Iran deal and imposed sanctions on them and any countries buying Iranian oil. Or as one German official put it, 'The Americans created this mess and now they have to find a way to get out.'"

Meanwhile, not only are there waring factions within Trump's own administration on the Iran policy, they exist on Fox News. Oliver called Fox host Greg Gutfeld's comments about Iran "breathtakingly stupid."

Gutfeld explained that the world is in a modern era where populations don't matter in war, because people don't really get hurt anymore. It's merely planes and drones and other machines that get destroyed. So, in Gutfeld's mind, "It'll be stuff vs. stuff. And fortunately for us, we have the best stuff."

"If someone said that to me at a dinner party, I'd say, 'Excuse me, this child is drunk. Someone gave him wine, I don't know who, but he's ranting like a lunatic about how all war is stuff vs. stuff now. He needs to be put to bed,'" Oliver said.

Oliver explained that Trump had a very difficult time understanding things at first, noting that there was nobody in the drone, which he understood as a good thing. It's unclear if Trump knew if drones were unmanned before this incident or not.

"That's right. There was nobody in the drone. Because that would have made it, and I'm going to throw some military jargon out at you: a plane," Oliver told the president.

Oliver went on to compare Trump's decision akin to putting chicken guts, jello and human hair into the oven and coming out with a perfectly crafted cake. It's both surprising and amazing what the final result was.

"I'm honestly worried that the next time you put the same garbage through this process, this probably isn't going to be the result we're going to get," he warned.